In its first season with a new coach, the Palo Alto High School boys’ wrestling team will send four wrestlers to the Central Coast Section finals this weekend. 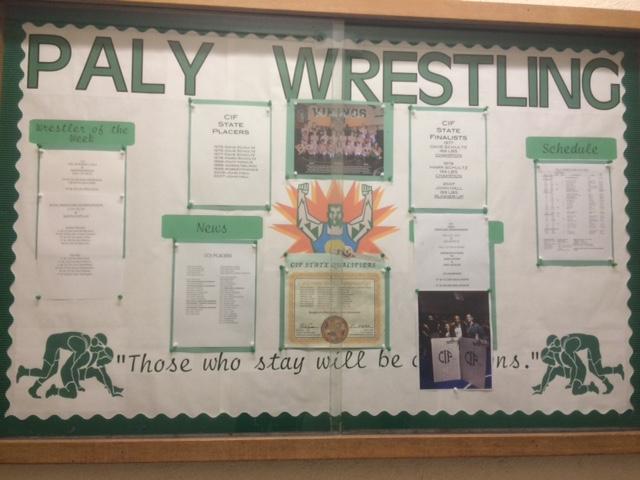 Boys’ wrestling schedules and news hang in the Big Gym. The Vikings will go to CCS this weekend. Photo by Julia Asin.

Although the Vikings struggled early in the season, head coach Braumon Creighton said the team improved its conditioning and positioning this month and expects to qualify three of the four CCS-qualified Paly wrestlers to the California Interscholastic Federation state championship.

“We are training hard the rest of the week to prepare for CCS,” Creighton said. “[We will be] mainly drilling and working on tactical things for each individual – lots of stretching and paying attention to our nutrition.”

Giaccia said the team is practicing every day to prepare for CCS.

“We’ve been training all season for this,” Giaccia said. “[We] practice every single day, and for me, twice a day. … Our expectations are to have three CCS champions. Team expectation [is to place] within the top 10.”

The boys will participate in the first day of CCS finals on Friday at Independence High School.