Fear not, Palo Altans! Gong Cha has come to downtown Palo Alto to give you a little more variety in your pearl milk tea endeavors. Panda Milk tea with crunchy white pearls and chewy tapioca pearls and QQ Passion Fruit green tea with vibrant fruity flavors that taste like summer are just a couple of creative flavors that Gong Cha offers.

Gong Cha, which opened last Saturday, is located at 439 Waverley St. and has other locations in the Bay Area, including Fremont and San Jose. It also has more than 300 stores in Asia and Australia, according to its website.

There are many ways for a customer to personalize a drink at Gong Cha. The sweetness and ice levels can be adjusted, and there are a variety of additions, such as the standard egg pudding, tapioca pearls, coconut jelly and herbal jelly. Gong Cha also features milk foam, basil seed, ai-yu jelly and the uncommon white pearls. The white pearls are made from seaweed extract and are slightly crunchier and healthier for you, according to shift lead Jacki Wasmann. 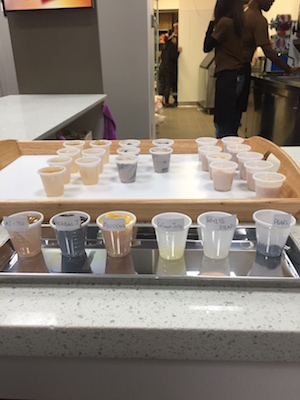 An array of possible additions is on display at Gong Cha currently. There are also samples of puddings and jellies for the customers to experience the flavors without committing to a full drink. Photo by Alex Merkle-Raymond

Gong Cha also specializes in frothy milk-topped teas, or “Mustache Teas” as its menu says. According to Wasmann, the green and black pearl milk teas are the best sellers.

Gong Cha is the second pearl milk tea place in Palo Alto after T4 moved in last October. Wasmann said that the company is not worried about the competition with T4 since it has different specialties and everyone has different preferences.

Palo Alto High School students are excited about the new PMT store since they are no longer limited to T4 in the local vicinity.

“The tea itself was really fresh,” junior Aiva Petriceks said. “Unlike other stores where you can mostly taste the syrup, the tea actually came through. The passion fruit tea was amazing. I didn’t like the boba [tapioca pearls] because it wasn’t as soft as I would like it. It’s really unfortunate that they [Gong Cha] don’t have the best location, because it deserves the attention T4 gets.”

Student Opinion: “I liked the change of sweetness,” senior Mary Champagne said. “Not too sweet and very reminiscent of Loving Hut.”

The green pearl milk tea was rich and not watered down. The pearls were not very generous, which was alright because they were not very chewy or flavorful. Photo by Alex Merkle-Raymond

Features: Walking into the store, you are met with a smiling face and an overwhelmingly large board depicting the available drinks. The store generally seems dim and not very lively. The interior is very dark with the color scheme focusing on brown. There was limited seating, but there were still places where you could sit down and chat.

Gong Cha has two sizes: medium and large. The drinks are very customizable with variations in ice and sugar. The sweetness is very important to change because the tea is generally very sweet.

The tapioca pearls definitely left something to be desired. The pearls were not squishy, felt very oblong and were very difficult to fit through the straw. The center felt almost undercooked.

The tea itself was very flavorful and rich. The texture was creamy and not at all chunky or powdery. There was no distinct feature for Gong Cha. It felt very standard, where nothing was bad but nothing was striking or extremely delicious.

The service was very slow. The workers talked with each other to make sure they were doing the right thing. I assume this is because the store is still very new and they have not worked out all the kinks yet. The staff was very friendly and willing to answer any questions about the menu. Gong Cha uses a stamping system where the 10th drink is free.