In the letter, Diorio explains that she and ASB brainstormed ways to apply ideas that had come up in recent Western Association of Schools and Colleges discussions at Paly. Many of these efforts will be put into effect this school year, such as having a homework-free February break with no tests allowed on the following Tuesday and Wednesday; allowing flexibility when it comes to test and assignment scheduling due to the impact of the recent Henry M. Gunn High School student death by suicide; and proposing a number of minimum days for students, providing the staff with time to discuss homework policies and mindfulness training. 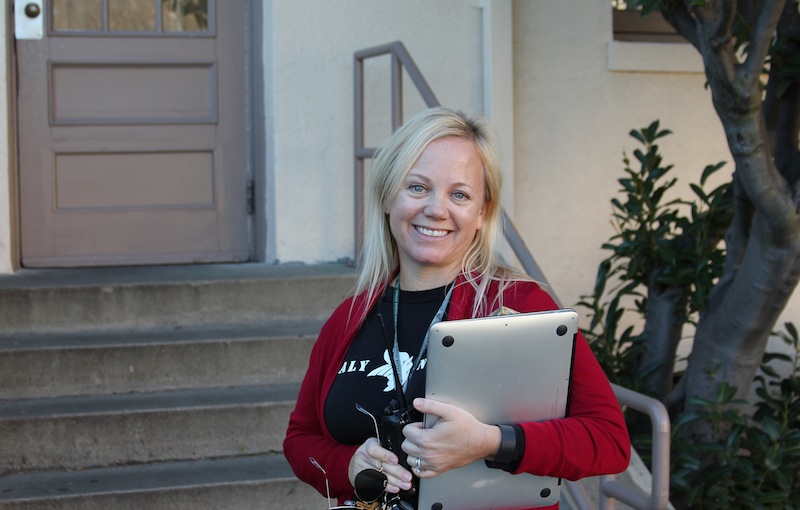 Paly Principal Kim Diorio stands outside of the Tower Building. Diorio is wearing red and black today in support of Gunn High School. Diorio and ASB worked to create a list of ways to reduce academic stress and improve the school climate. Photo by George Lu.

After the recent tragedy, Diorio felt that now was especially the time to begin implementing these ideas instead of keeping them on the back burner.

“We started having these conversations a year and a half ago, and we want people to understand this is not a knee jerk reaction,” Diorio said. “We want to take action. We know this is an issue on our campus.”

Diorio understands that while these changes cannot solve the problem of mental health issues, she hopes that this will help alleviate unnecessary stress.

“Recognizing that suicide is an extremely complex mental health issue, we [the administration] acknowledge that academic ‘stress is a problem, but not the problem,’ as one Gunn student described for our community,” Diorio said in the letter. “However, we do have the power to take small steps to reduce stress and create opportunities for students to take a well-deserved break from the daily grind.”

Other possible structural modifications described in the letter will begin to be executed during the 2015-16 school year. These suggestions include working with the Education Council to create homework-free nights or weekends; preventing students from having more than two tests a day or allowing more freedom to reschedule tests; and having no major tests or projects due on seven-period C days.

Diorio wanted to revise the C day schedule, particularly in response to recent feedback from parents, students and staff. Over 80 percent of parents and students stated their dislike of C days in the survey, but some teachers appreciate some aspects of having all seven periods in one day.

“Some teachers really like to have contact with students three days a week, so we decided we can keep C days but [to] change them,” Diorio said. “It’s ridiculous to spend all day Saturday and Sunday prepping for a C day. [With the new plan], there just wouldn’t be heavy work for a C day – it’d be more of a review day. We can also make a C day a minimum day, and then the teachers can stay and talk about homework.”

“[Changing] C days would be beneficial because it would decrease the amount of homework assigned over the weekend,” junior Sophie Swezey said. “It’s also very difficult to get through seven classes in a day, and I feel like shorter periods are considerably less productive than block periods.”

Diorio also said she hopes that this letter will help promote increased discussion between students and teachers.

Students appreciate the sentiments the administration has been showing and acknowledge the support the school has been giving them during this difficult time.

“I think it [the letter] sounded really genuine and [that] things will get set in motion,” senior Daryl Dillahunty said. “I think when this [a death] happened before, nothing was really done and nothing was changed. I feel like now, there are plans being made and something will actually change. The students’ feelings are really being taken into account, and our stress is finally being validated.”

The letter also included a Google survey form, which will allow students to provide feedback and suggestions about ways to improve the school climate and reduce stress.

Diorio hopes to create a safe, supportive environment for students.

Diorio emphasized the importance of students’ well-being, not just their academic success.

“Let’s take time and put our lesson plans aside and focus on what’s important,” Diorio said.

*Editor’s note: Since the publishing of this article, the letter that Diorio wrote has been taken down from paly.net. Diorio posted a revised letter on Thursday, Feb. 5.