While protests were held in downtown Palo Alto on Nov. 25 and on Dec. 3 after grand juries ruled against indicting police officers Darren Wilson and Daniel Pantaleo, respectively, today was Paly’s first student-led response to the grand jury decisions. 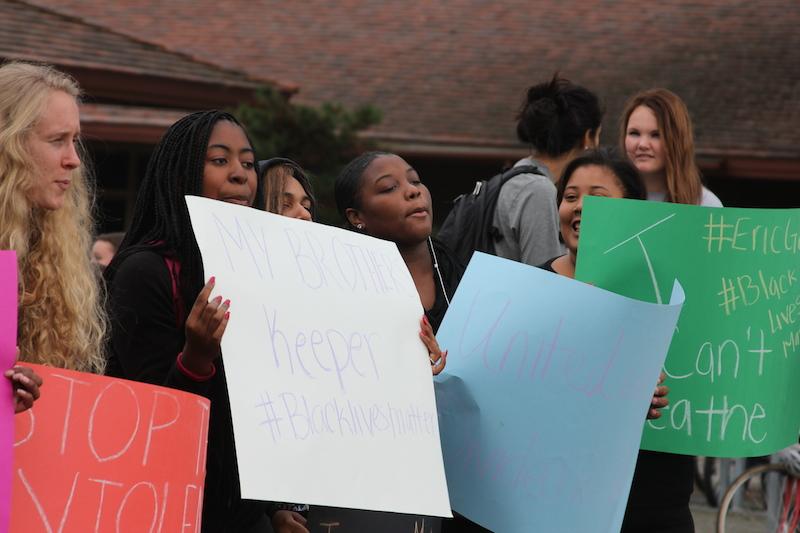 Palo Alto High School students in the Black Scholars United club hold signs on the Quad during Lunch. These posters read messages like “#blacklivesmatter” and “I can’t breathe.” Photo by George Lu.

Students held signs with phrases such as “When will this stop” and “Hands up, don’t shoot” and chanted “No justice, no peace” and “Stop the violence.” Unity Club members also drew chalk outlines of bodies, names of unarmed minorities who were killed by police officers and hashtagged catchphrases around campus.

Senior Tiffany Fields, who held a sign saying “My brother’s keeper,” told the crowd, “Mike Brown could be my brother any day because he would put his hands up if someone’s going to shoot him. Like Eric Garner, my brother is big, he’s tall, and he could be choked to death because he is big – because he is intimidating, because of the color of his skin, and that’s a problem for me.”

Junior Dami Bolarinwa’s sign said, “This is the United States. Are we truly united? This ain’t a black thing, this ain’t a white thing. It’s all our problems.”

Senior BSU co-president Jamina Kirkendoll wanted to promote awareness and a sense of unity within the community with this protest.

“The impact I was hoping for was to get this issue known on campus so that people can join, that black lives do matter, that we should support each other – it doesn’t matter what skin color we are – that we are all together as one,” Kirkendoll said.

Junior Siggi Bengston said she believes that the youth play a crucial role in social issues. 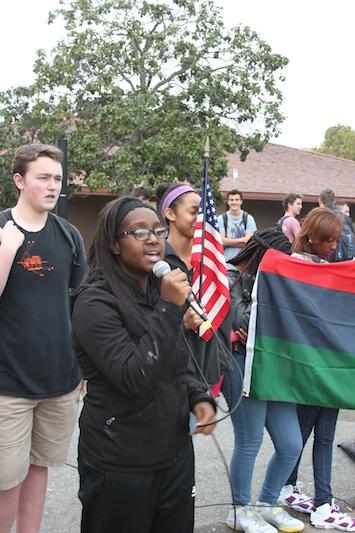 “I don’t think people realize how real racism is on Paly campus and people don’t realize how serious this issue is,” Bengston said. “We have the means to change society, and it starts with us. We are the younger generation. If we don’t do anything and we sit around and are silent, nothing is going to change.”

Only a few other students joined the 15 or so BSU members in the protest, but Fields said that this was not a concern to the club.

“We [BSU] weren’t expecting anything,” Fields said. “We were doing this for a cause that we wanted to support. We wanted to do it for ourselves to show everyone that we care.”

Senior Sabrina Goyal felt that the fact that the protest was on the Quad during Lunch lessened the effectiveness of the protest.

“I would say I’m kind of disappointed that it’s only a small group [of protestors] because I feel like everyone kind of shares these views,” Goyal said. “I believe in what they’re saying, but I don’t feel comfortable going up there and standing with them. I think that’s kind of a shame. I guess it [the protest] is a start.”

“I think it’s part of our democracy, and it’s great that students can participate in this democracy,” Kellerman said. “Part of that is peaceful protests sanctioned by the administration or the government. … That’s a big part of democracy – to express yourself in a peaceful way. Frankly, I wish students would do more of that here to express themselves.”

Junior Ariya Momeny felt that the protest was not well-timed and said he believed that if the protest supported the officers in question, the school would not be as supportive. 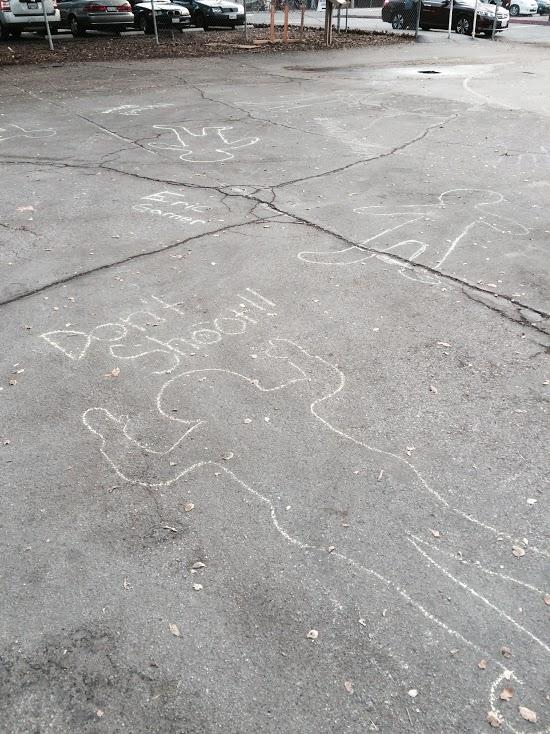 Chalk outlines of bodies, phrases like “Don’t shoot” and “Black lives matter” and names of unarmed minorities who have been killed by police officers were drawn around campus. Photo by Lizzie Chun.

“This is and could be interpreted as affecting my education because lunchtime is my only time that I can unwind, especially during this period when I’m studying for finals and am really stressed out,” Momeny said. “I don’t personally mind, but I could totally see how someone could be offended by this. It’s a question of the guidelines and rules of how this [protest] is allowed, but if I was protesting something that the school itself didn’t like or wasn’t completely accepted by people, I would get shut down.”

Editor’s note: The story was corrected on Dec. 10 to attribute the chalk-drawn outlines to the Unity Club, not the Black Scholars United club.