Voice of the Week: James Franco

The Paly Voice and the Paly Radio Club met up with celebrity alumnus James Franco to discuss his murals on Paly’s student center, his love for academic environments and whether he would prefer bananas for feet or for hands. Click here to hear the audio recording of the interview on Paly Radio Club’s sound cloud. 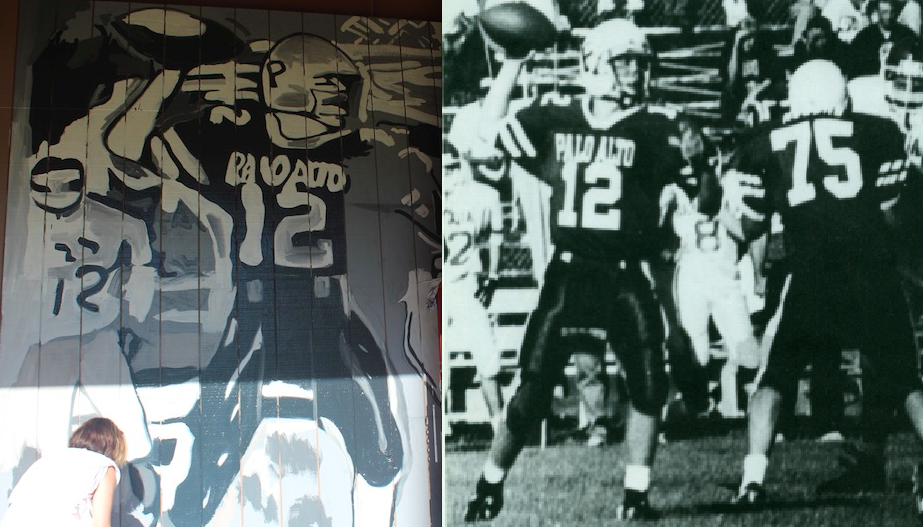 The mural painted by actor and alumnus James Franco is inspired by photos from Palo Alto High School’s 1993 yearbook, when Franco was a freshman. Right: The original yearbook photo in which “Mike Smith throws one of many touchdown passes.” Photo by Madrono Staff. Left: James Franco’s mural of the image that is now painted on the exterior of the Student Center. Photo by Adele Bloch.

The Paly Voice/Paly Radio Club: What prompted you to paint this mural?

James Franco: I have done a lot of work with writing and artwork and even films that are inspired by teenagers or coming of age, and because I went to Paly, this is my main source of reference for this time. I just liked them [the photos in his freshman yearbook in 1993] because when they were in the yearbook, they were just photos of people going to school. But as time goes by, at least for me, my high school years became this weird mythical place. When I was a teenager, it seemed like I felt so much; everything seemed so important and there was so much pressure of all kinds and I was experiencing certain things for the first time. And so, the paintings, for me at least, captured that. Even though they’re just paintings of a football game or a volleyball game or The Campanile, to me it evokes the feelings of that time. … Instead of rebuilding a part of Paly, I could show the art work that was inspired by Paly at Paly.

RC: Did your high school and your youth tend to have a big influence on your work?

JF: It [high school] continues to inspire me. When I focus in on high school, the characters for me are much more alive in some ways than older characters. When you get older, you get a little bit more set in your ways. But when you’re young, your life is still ahead of you. You haven’t made all your most serious decisions about life yet and you’re discovering things for the time. I just find that those kind of characters are the most alive when you work with them.

RC: What’s it like coming back to Paly and seeing everything again?

JF: I love school, and I love being around academic environments. Woj [journalism teacher Esther Wojcicki] and I are even talking about a class that I might teach here in a year [at Paly]. I love it here. When I was in high school, I had a bit of a hard time, but I was just figuring out who I was. But now I love coming back. 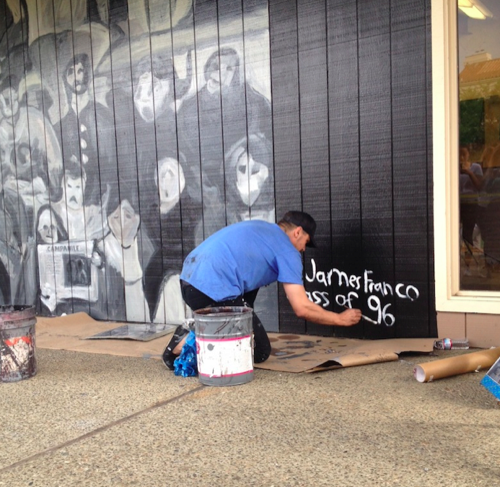 Franco signs his name and class graduation date on the mural that he painted on the outside of the Student Center. “We wanted to tie it [the mural] in as something that was cool to look at and something that people could feel proud to have as a part of their campus,” Franco’s art studio manager Anna Kooris said.

RC: What first got you interested in being an actor and being a part of the entertainment industry?

JF: I’ve always loved movies and theater. When I was at Paly, I’d drive to San Francisco to see ACT [American Conservatory Theatre] productions. I’d see David Stratton do the “Tempest” there, and I think I saw “Phantom of the Opera” there, and “Chicago” and stuff like that. That was the only thing that was offered around here. And I’ve loved it for a long time, but I was very shy. And then in my senior year, I joined the drama class and I did two plays. … Then I went to UCLA. Once I was in LA and I saw that everyone was trying to get into the movies, so I decided to give it a shot.

RC: Did any specific teacher help shape your dreams and plans at Paly?

JF: Since Paly, I’ve had many very influential teachers. I’ve been very lucky and I’ve got to go to a lot of great great schools, so I’ve had tons of great professors. At Paly, Woj is a big influence. 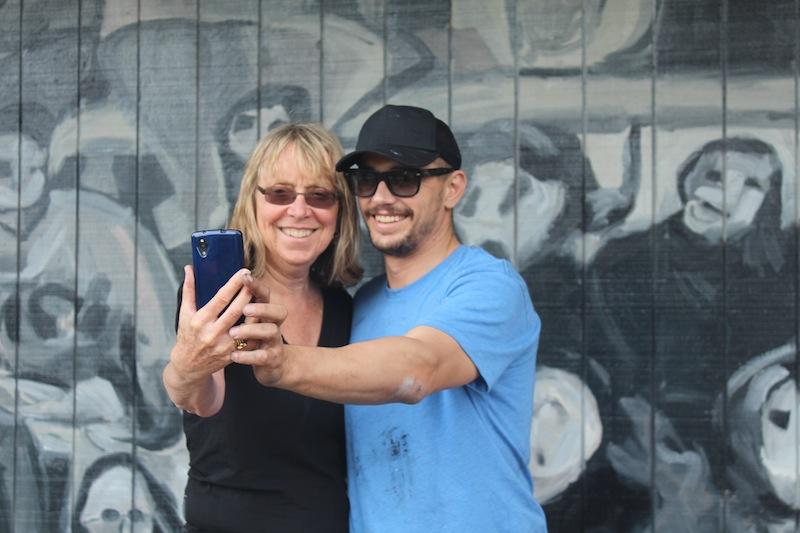 Paly alumnus Franco and journalism teacher Esther Wojcicki pose for a selfie in honor of the completed murals. Wojcicki is one of Franco’s biggest influences at Paly, and they still keep in touch. Photo by Adele Bloch.

RC: What was your first acting job after high school?

JF: I went to UCLA and after a year, I left because I wasn’t in the drama program and I wanted to act. So I went to acting school, and my parents said they wouldn’t support me if I didn’t go to college. So, I then went and worked in the cafeteria at UCLA even though I wasn’t a student and then I worked at McDonalds. And then I got a Pizza Hut commercial – it was a Super Bowl commercial, so it paid pretty well, and it was a CG [computer generated] image of Elvis dancing in the Pizza Hut. And so it starts off with a bunch of guys in the parking lot saying, “Hey, you heard they’re selling the new deep-dish pizza at Pizza Hut, and Elvis is serving it?” And they’re like, “No way, they don’t have a deep-dish pizza.” And then it cuts to Elvis serving a deep-dish pizza. And that was it, and then I could support myself from my acting from that point on. (Watch this commercial here.)

RC: Would you rather have banana hands or banana feet?

JF: Oh, tricky. Like slip all over the place kind of thing?

RC: No, if you just had five bananas right here on your hand jutting out?

RC: I’d just like to think that they’d be ready for action as a hand or as a foot.

JF: I think I use my hands more than my feet, so I’d have to do banana feet. If I got hungry, I can just eat my feet. 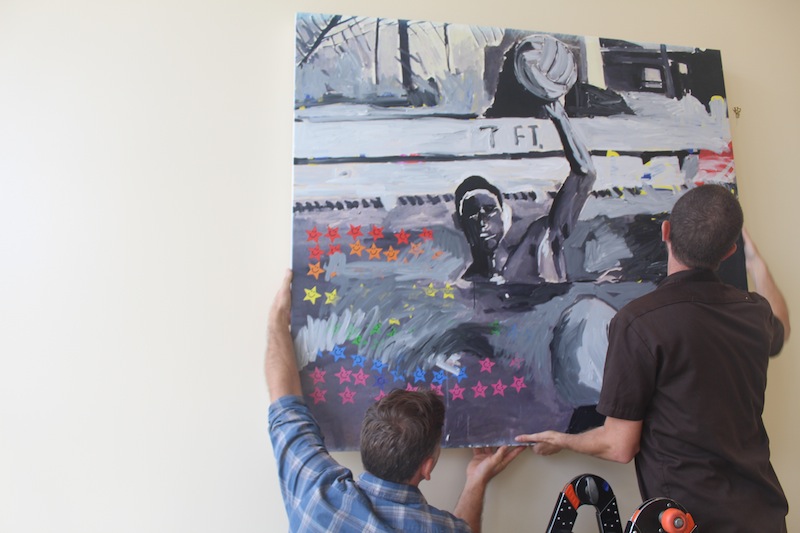 Two helpers hang up Franco’s painting of a water polo player in 1993. Over 10 of Franco’s paintings that are inspired from yearbook photos are spread throughout the Media Arts Center. Photo by Adele Bloch.

PV: Do you have any advice for students in general or student journalists?

JF: What I love about that class [The Campanile] is that you’re in school but you’re working on something that creates a product for the school. What that means is that you are becoming aware of your readers. You aren’t just writing for a grade – you’re writing to get people to read it. That creates a completely different kind of relationship between you and your work, and it’s on the way of creating a professional relationship with your work. So any time, if you want advice, any time you can have that situation or start to become aware of what it is you’re doing or what you will be doing when you write professionally and how you’re connecting to your audience is really valuable.

Franco is holding an art show and film premiere for the grand opening of the Media Arts Center from 5 p.m. to 8 p.m. on Saturday, Oct. 18. Tickets can be bought here.