Living in Silicon Valley, it’s no surprise that students here are incredibly “well-connected.” 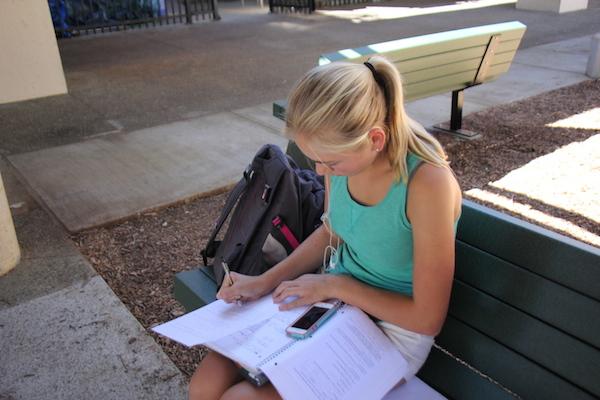 Freshman Olivia Fernandez uses her iPhone to work on her homework during her prep. Photo by Ana Caklovic.

No one would guess that a public high school’s number one addiction is being called education’s greatest resource. But the growing dependency on this product and the technology behind it is transforming the culture of Palo Alto High School. Technology represents the language of the next generation, the top end of the education spectrum and a community that’s pushing the boundaries of innovation. But what is Paly’s latest obsession, both in the classroom and on the Quad? The smartphone.

Sophomore Samarth Venkatasubramaniam agrees: “Both students and teachers [are] becoming really dependent on their smartphones,” Venkatrasubramaniam said. “Many teachers … ask you to pull out your phone and ‘take this quiz’ or ‘use this app’. And students … communicate using their phone whether it’s chatting or texting and calling or Snapchatting … they’re always on their phones for communication or studies.”

The presence of iPhones and other smartphones in the classroom is viewed as an influence that can both help and distract. Students have a tendency to get distracted when they use their phones, but junior Ella Higashi thinks there are benefits that outweigh the risk of distraction.

“My history class used them [smartphones] the other day, and I think it was helpful,” Higashi said. “Sometimes … in science you can use your phone to upload things to the screen, which is really good for visual learning.”

Senior Claire Priestley also feels distraction should not be a major concern when using smartphones educationally.

“Teachers are really concerned with you not being on task with your phone but I think the majority of the people will stay on task because most people here are really good people,” Priestley said.

The increasing use of smartphones in classroom activities may be due to an overall increase in smartphone ownership, specifically, iPhone ownership. In a study entitled “Smartphone Ownership in 2013,” the Pew Research Center found that “those from the upper end of the income and education spectrum are much more likely than those with lower income and educational levels to say they own an iPhone.” The study found that 25 percent of cellphone users in the U.S. own an iPhone.

The iPhones is known for its beautiful design and intuitive interface. However, students like Higashi argue that the Apple product is overrated and that phones should be valued for their functionality instead of their beauty.

“I think other smartphones can do the same stuff as iPhones,” Higashi said. “I think it’s more of the name ‘iPhone.'”

According to senior Maeve Lavelle, the popularity of iPhones and the power of the brand name seems to only have increased with time.

“Freshman year it was kind of like, ‘Oh, you have an iPhone, cool. I don’t,’ but it was still acceptable. By senior year everyone has an iPhone except for maybe the odd few, and if you don’t have one by now, it’s kind of like ‘Oh, what’s up with you?’” Lavelle said, who is an owner of an iPhone 5S.

One aspect that contributes to iPhone ownership may just be a matter of familiarity with the iPhone and an unwillingness to step out of the comfort zone of Apple products. “I’ve only had an iPhone… so I don’t really know how to use phones that aren’t iPhones,” Priestley said. “I think I’d always stick with the iPhone because it’s just what I know.”

The iPhone can be either be perceived as a positive result of technology or an unnecessary display of money. iPhone culture is the feeling that an iPhones is the only acceptable type of phone, and that not having an iPhone is a huge loss and disadvantage.

“[iPhone culture] is a result of us being in the upper-middle class to upper class, and it’s kind of a gross display of our wealth,” junior Sean Jawetz said. “But I don’t think it has a positive or negative effect on the culture of our student body.”

As Venkatasubramaniam puts it, “Phones are practical, obviously.That’s why people use them.” 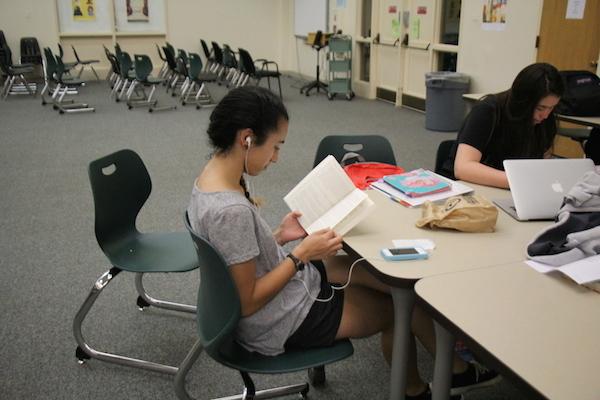 Sophomore Ciara Bleahen and sophomore Alicia Mies use their iPhones to listen to music and study in the library. Photo by Ana Caklovic.