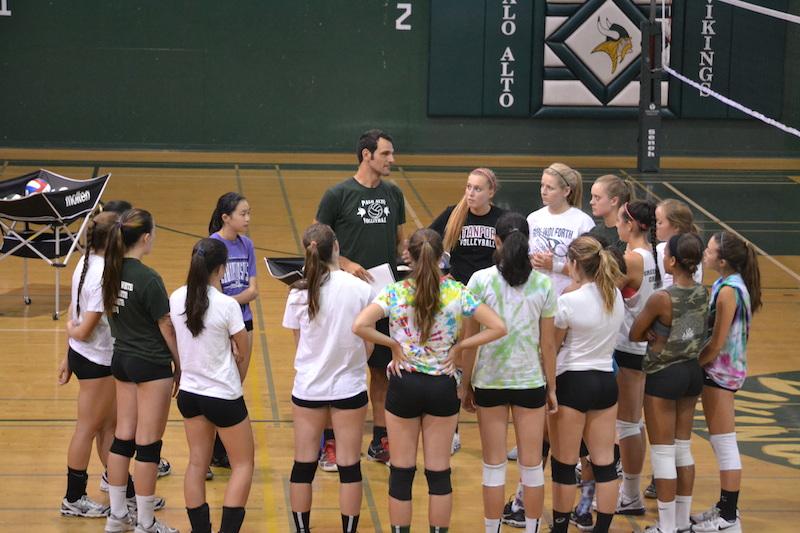 The Palo Alto High School girls’ volleyball team discusses season plans before one of their first practices of the season in the Paly gym. Photo by Amy Leung.

Senior captain and outside hitter Jade Schoenberger agreed with Lee.

“I’m always excited for Gunn because both teams want to win so bad, mainly for bragging rights,” Schoenberger said.

Even so, Schoenberger says that she holds no strict expectations for the outcome.

“I can’t predict how we’re going to do,” Schoenberger said. “If we play our game, we’ll be fine and hopefully pull out a win.”

“Not having Claire Dennis will be a little more difficult because she’s our tallest player and main blocker,” Lee said. “We are definitely going to miss her on the court, but we aren’t going to let that affect our playing.”

So far, the team has only lost to Sacred Heart Prep, Pleasant Grove and Acalanes in both the Deer Valley and Harbor tournaments on Sept. 13 and Sept. 20, respectively.

“We are looking out for Jade [Schoenberger] — she is one of their strongest hitters,” Brigham said. “So we are going to put a good block up on her.”

“The loss of last year’s seniors was a bummer — they were all so talented,” Schonenberger said. “But some younger players on the team have really stepped up this year, so I’m confident we will have a fun season, win or lose.”

Watch the game at 6:45 p.m. tomorrow at Gunn or read The Paly Voice’s live blog.