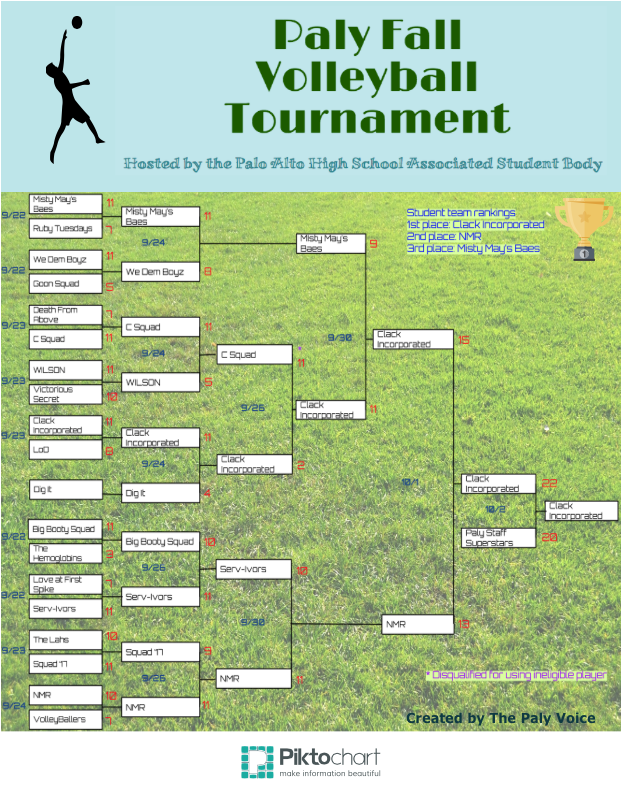 Keep up with the intramural volleyball tournament by checking out the above bracket, which will be updated daily. Infographic created by Lizzie Chun, Saba Moussavian and Nika Woodfill.

The tournament is the first of its kind at Paly since 2003. Nineteen teams are set to compete, nine of which are comprised of only senior players.

“A fun thing to look for is definitely the names of the teams,” Musil said. “I love them.”

The team names and rosters can be found here, courtesy of ASB.

Sophomore and player for the VolleyBallers Josh Code is excited to participate.

“I’m most excited to have fun with my friends and my team to take home that prize,” Code said.

The games will culminate in a staff versus winners game on Tuesday, Sept. 30, according to Musil.

A similar tournament took place in 2003 when a group of boys claimed they could beat the girl’s varsity volleyball team. The varsity girls accepted the challenge, and ASB assisted in making it a school event.

Musil hopes to bring back that same energy to this highly requested event. She says the tournament will be upbeat and energetic.

“Just come and cheer,” Musil said. “It’s gonna be crazy and competitive and a lot of fun on the Quad watching the game. And watch out for flying volleyballs.”