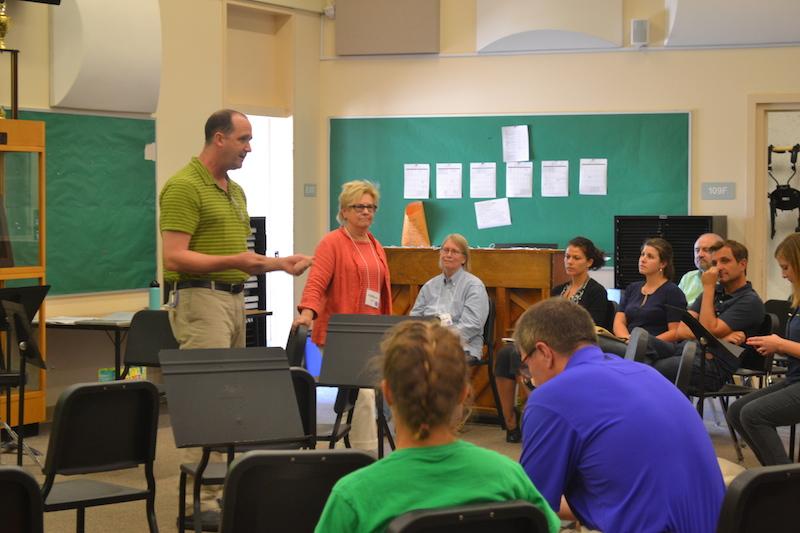 Teacher on Special Assignment Eric Bloom talks to a group of teachers during a WASC meeting with the School Culture sub-group. Photo by Amy Leung.

Recently, students have been taking a WASC survey in their English classes. But many students find themselves wondering: what is WASC?

According to the Palo Alto High School WASC Coordinator and Spanish teacher Emily Garrison, WASC stands for the Western Association of Schools and Colleges.

“WASC is a non-profit organization,” Garrison said. “It works very closely with the California Department of Education, but it doesn’t have any other affiliations besides that really.”

What exactly does WASC do then?

“In order to make your transcript valid for college, we have to be WASC accredited,” Garrison said. “Everybody wants to have WASC accreditation because basically what that says is the coursework, what’s happening on campus, is valid.”

The surveys administered in English classes provide guidance for improving the school.

“At the end of the year, we’re going to be done with one of our six-year cycles, and the reviews that students have done are going to be part of the process that we go through in deciding how well the school has done and where we can move on from this point,” said junior Molly Kraus, a member of the student WASC group.

“Our job is to do two things — what’s Paly doing really well?” Garrison said. “We really are an amazing school. But with any school, or with any student or any person, even if that person is amazing, there’s still always things that you can improve upon. So that’s the second part of WASC.”

Currently, the Paly WASC group is finishing up the last cycle and starting a new one, according to Garrison. Students, parents and staff discussed the big pictures of what’s going on at Paly at the most recent focus group meetings.

“We really analyze that [information] and we think about it,” Garrison said. “Then what we’re going to do is put it in a much larger context and say OK, we want to try to focus in on three to five major goals. We don’t know what those are yet — we’re not quite there yet, but we’ll be there soon. In the next month or so, those goals should be developed.”

After creating these goals, Garrison says that the next step is a commitment to working towards those objectives for the next six years until the next WASC cycle. For the time being, the group is gathering as much data as possible.

“All this stuff we’re doing right now goes into a big report that’s probably going to be about 300 pages long,” Garrison said. “It’ll be finished probably by the end of December. And then that whole report of those two big pieces — what does Paly look like and then how can we improve — that can then get sent to WASC.”

After reading the Paly WASC report, WASC will send a team in early March to validate the information.

Garrison says that this month will be important for WASC updates because it’s the starting point for the new cycle of this upcoming year.

“In the next month, things are really going to start getting interesting with WASC,” Garrison said. “We just want to make things better for students.”