The Paly Voice • May 22, 2014 • https://palyvoice.com/72280/news/vandalism-incidents-on-newly-repainted-senior-deck-cause-stir/

After a Palo Alto High School senior organized an administration-endorsed Class of 2014 project to paint the Senior Deck over the weekend, the deck has seen two counts of vandalism, the first incident discovered Monday evening and the second this morning.

Senior Hayley Tawzer, who came up with the idea to paint the deck early on in the school year, said she felt disrespected by Monday’s vandalism, in which a ‘5’ was painted in yellow, the Spirit Week color for the junior class, over the ‘4’ in the ‘2014’ painted on the top of the deck.

“I felt very disrespected as an individual and as a member of the class of 2014,” Tawzer said.

According to a junior who witnessed the painting of the ‘5’ in washable paint, the alleged vandals were trying to start a junior prank after engaging in a pointed Twitter discussion between seniors and juniors over the use of the Senior Deck.

The tension between the junior and senior classes appeared to begin when some juniors used the deck Monday, a day when most of the senior class did not show up to school in observance of an unofficial “senior cut day”. According to senior Ethan Look, social media posts by the juniors of themselves enjoying the Senior Deck prompted him to tweet the following message: 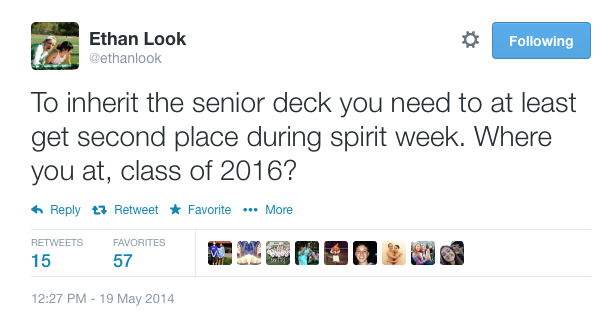 The witness said that the consequent Twitter conversation, of which various Paly upperclassmen and alumni were contributors, sparked a group of juniors to form a plan to retaliate by painting over part of the deck.

“A bunch of people  were fed up with how the seniors were being really rude to us [on Twitter],” the anonymous junior said.

While Look said he did not intend for his tweet to be taken literally, he did agree that the Twitter conversations contributed to the motives for the vandalism.

“I certainly do think the arguments on Twitter fueled the fire,” Look said. “With my first tweet, I had no intentions of making anybody mad. I strongly believe that the next senior class deserves to inherit the deck, but I wouldn’t be a senior if I didn’t defend my turf a little.”

According to Tawzer, many students thought that the painting of the deck was a senior prank and were not aware that the activity was approved by the administration and funded by ASB.

“This [the repainting] was not a senior prank, it was a senior project,” Tawzer said. “It’s part of a Twenty Percent Project for Ms. [Erin] Angell,” referring to the semester-long project in which Angell’s World Literature students spend 20 percent of their time devoted to the class designing and completing a project of their choice.

Members of the junior class expressed disappointment in the alleged actions of their classmates.

“I wish they [the juniors] hadn’t painted the 5 on the deck,” junior Paloma Tracy said. “When the seniors painted the deck, it was a nice gesture for the school, and it should not have been disrespected like that.”

“I think it just makes our class look bad,” junior Courtney Hartwell said. “It’s not our time yet to take over as seniors.”

Tawzer, along with senior Talia Brown, cleaned off the yellow paint from the ‘5’ late Monday night, she said. The scrubbing process took around one-and-a-half hours.

The deck, now restored to its fresh paint job, features a camouflage-print background and ‘2014’ written in large white numbers across its surface.

“Since the first day of school this year, my friends and other people have been talking about painting the deck and making it better,” Tawzer said. “My hope of painting the deck was that the Class of 2014 would leave behind a new tradition or legacy to the other classes to come. I meant for this to be a fun, cool way for the senior classes to bond and add their own style and class spirit to the deck when their time came.”

According to the junior witness, who said she watched others paint the ‘5’, the students who allegedly painted over the deck were not trying to be disrespectful.

“We weren’t trying to be disrespectful at all,” the source said. “If we knew that it would hurt their feelings or that it had anything with them trying to give a gift to the school [we wouldn’t have done it].”

A second junior who took part in the vandalism added that many juniors were not happy with the design of the deck because it clearly is associated with the Class of 2014.

“They [the seniors] decided to paint the deck and they did an awesome job, but saying its a ‘present’ to us, with a big ‘2014’ on it isn’t something we really wanted,” she said. “This is high school, so there will always be rivalries and pranks pulled on different classes. That’s what keeps things interesting.”

Now that the yellow paint has been washed off, seniors are enjoying their use of the redesigned deck.

“[The deck] definitely looks good, it really shows all the school spirit that our class has and it really unifies us,” senior William Yang said. “It looks freakin’ awesome, I love it.”

Look, who later tweeted an edited picture of the deck with ‘PALY’ digitally painted over the ‘2014′ and ‘2015’, stressed the importance of school unity.

“When it comes down to it, we all go to Paly, and we all want the same thing: an environment that can lead us to success in the future,” Look said. “That will not come about if there is hatred between classes, and no matter how fun it is to be on the deck and rub it in to the other grades, we can’t have people sneaking into Paly to paint the deck and bullying people on the Internet.”

UPDATE: A red ‘7’ was found painted over the ‘4’ on the Senior Deck Thursday morning. As of lunch, the ‘4’ had been repainted but red paint remains on the camouflage design. The source of the vandalism is unknown at this time. More information to come.