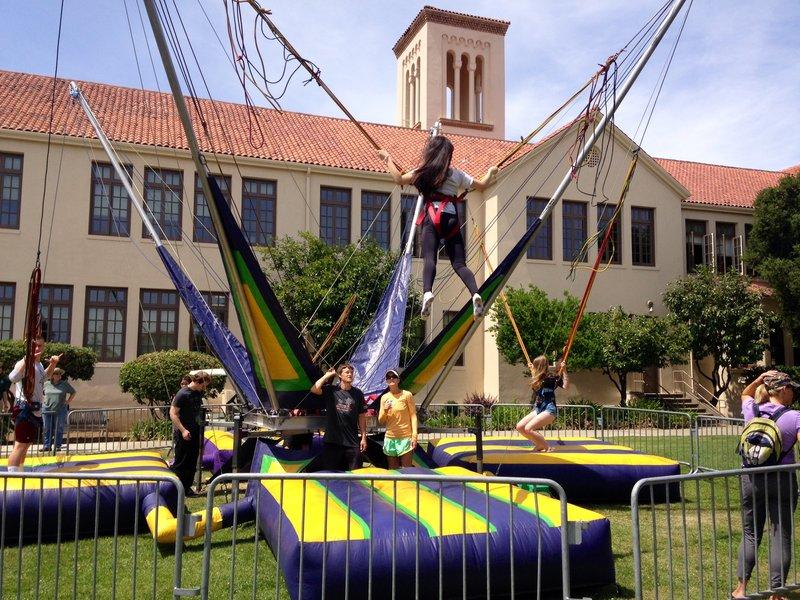 One of the many highlights of this semester at Palo Alto High School was Field Day last Friday, during which bungee jumping was offered as an activity for the first time. Photo by Amanda Carlsson.

The school year is finally coming to a close and among countless projects and finals, The Paly Voice wanted to take a break and remember all that has happened this past semester at Palo Alto High School and within the Paly community. Despite controversial news surrounding old Paly administration dominating the community, these past months have also been filled with fun and success. Before we all throw our books in the air and head into summer, we want to take a moment to reflect upon the last five months:

Clubs continued to be active on campus this semester in lunchtime performances, competitions and events. A highlight for clubs this spring semester came when the Science Olympiad team placed first in regionals to advance to the Northern California state competition, where it came in second place. The Robotics team came in 22nd out of 58 teams in the Silicon Valley Regional competition to conclude its season. The club’s robot is built entirely by students, with little help from adult mentors. Additionally, The Best Buddies club was honored as an “Outstanding High School Chapter of the Year” for the second year in a row.

This semester saw not only changes in staff, but a change in administration attitudes. The administration selected Earl Hansen’s replacement: Jason Fung. Not only is he a Paly graduate (‘92), but he has been actively involved in multiple sports programs at Paly since 2008. Next, the administration selected Chase Hartmann to replace Mary Puorro as the new campus supervisor. You can catch Hartmann riding around campus on one of the golf carts. Finally, Principal Kim Diorio reached out to students in a whole new kind of way this semester: through pizza (and coffee for the parents). In an effort to reach out to the student and parent community, Diorio has installed a new series of lunch and morning meetings that will continue into next year.

Sports this semester had many highs and lows, wins and losses and seasons ending and beginning. Winter sports seasons concluded on a bold note this semester, and spring sports began immediately after, with some spring seasons still underway.

The boys’ basketball season ended in March with a 43-51 loss to Menlo-Atherton High School in the Central Coast Section quarterfinals. The team boasted a winning record, going 15-11 overall and 8-4 in league.

The girls’ basketball team made a strong run in the CCS playoffs, beating Mountain View High School in a huge comeback to advance to the CCS semifinals, where it then fell to North Salinas High School. A highlight of the season came when the team beat cross-town rival Gunn High School for the last time in the Big Gym before its planned demolition this summer. Gunn had beaten Paly twice the year before, so this close 49-45 win had even more meaning for the team.

The boys’ soccer team ended its season with a 7-8-5 record, falling just short of qualifying for the CCS playoffs.

The girls’ soccer team had a strong winning record of 11-5-5. The team’s season ended in a 0-2 loss to Los Gatos High School in the CCS semifinals.

The wrestling team placed sixth place at the Santa Clara Valley Athletic League finals, allowing it to keep its spot in the De Anza League for next season.

As for the spring sports, the baseball team (15-14, 9-4) failed to capture a league title this year, but looked to make a decisive run in the SCVAL Playoffs, which began with a decisive 5-0 win over Wilcox High School. However, the Vikings lost a three-game league championship series to Saratoga High School after being down one game to none to take second place in the SCVAL. The team then took  on Leland High School in the first round of CCS Playoffs yesterday, where it fell, 4-8.

After moving down to the El Camino Division of SCVAL and hiring an ex-San Francisco Giant to coach, the softball team greatly improved upon last year’s overall record of 3-22 and is now 14-12 overall and 4-7 in league. The team honored its seniors on Senior Night, where the Lady Vikings dominated Fremont High School. The boys’ golf team had a successful season, capturing the SCVAL title for the second year in a row.

Both the girls’ and boys’ track and field teams finished in the middle of the pack in terms of league standings, but competitors of individual events were expected to do well throughout the CCS playoffs. One such event was the 200 meters, for which senior Nick Sullivan and sophomore Eli Givens placed second and third respectively in the CCS finals yesterday.

The girls’ lacrosse team ended its season with a win by  beating Saratoga High School in the SCVAL championships. One highlight of the season came with a big win over Los Gatos High School on Senior Night. Another was beating St. Francis High School during the season and also in the second round of SCVAL playoffs for redemption after St. Francis ended last year’s Paly season in a triple-overtime thriller.

The boys’ lacrosse team recently defeated the previously undefeated Sacred Heart Preparatory, and advanced to the SCVAL semifinals where it lost to Menlo-Atherton High School in a 10-11 nail-biter.

In early February, Paly hosted a ceremony for seniors signing their National Letters of Intent to play collegiate sports next year. The ceremony took place in the Big Gym and was led by Earl Hansen prior to his retirement. Eight seniors who will compete at both Division I and Division III levels attended the ceremony, although many other graduating students will also play varsity-level sports next year but did not attend. Approximately 30 Paly graduates will be participating in varsity collegiate athletics next year.

After an exciting and close candidate race in March, the school elected the Associated Student Body Class of 2015. Once the election was over, the new officers sat down with The Paly Voice to reveal some fun facts about themselves. In April, ASB chose next year’s group of appointed officers.

After former Paly principal Phil Winston mysteriously resigned last summer, students were left wondering what had happened. Part of the answer came in April, when Palo Alto Weekly published an article outlining the issues related to Winston’s resignation. The article spurred a whirl of controversy among the Paly community, leaving some students pleased and other disappointed. The event was a significant moment in Paly culture, and left a large impact among the student body.

This year’s Prom was different than any other ever held before: not only was it held at a new and uncommon venue, but it was also the highest attended Prom in years. Prom was held at the San Francisco Exploratorium this year, at the museum’s new location on Pier 15. Although this venue choice made Prom tickets more expensive, it brought a unique experience to Paly Prom-goers. Presumably as a result of its location, this year’s Prom also brought about record-breaking tickets numbers. With combined evidence from ticket numbers and student surveys, this year’s Prom was one of the most successful in Paly history.

After an extended construction period, the new two-story classroom building and the Media Arts Center finally were up and available for students to glimpse into after Spring Break. Although neither will officially open until the start of the 2014-2015 school year, students have been able to tour the buildings, and some Advanced Placement tests were taken in the new classroom building. The iconic Big Gym, which will be torn down this summer, was celebrated in a “Farewell Big Gym” event in mid-March, honoring the 85 years it held athletic events, dances and more.

This year’s powderpuff competition saw many changes. The ASB class under Matt Hall and new athletic director Jason Fung came together this year after complaints from previous years about team selections. This year was the first year a raffle system was implemented to select the teams as opposed to leaving the selection up to each class. This year, new rules prohibited the quarterback from running and required all players to wear mouthguards. In the first round, the seniors took on the freshmen. The seniors, seemingly frazzled by the new rules and new team, fell to the freshmen, 0-7. The sophomores and juniors then faced off, and the sophomore class proved victorious, 21-0. In the finals, which occurred during a long lunch thanks to a special schedule, the sophomores crushed the freshmen to take home the title. The powderpuff final half-time featured a celebration in honor of retiring physical education teacher, football coach and athletic director Earl Hansen and Sports Literature teacher and football announcer Mike McNulty.

This April, Not In Our School’s week came to a much larger forefront than in past years with daily lunchtime activities and performances. Each day had a color and a theme, such as Ability Awareness, to go along with the activities.

And to finish it off with a little bit of pop culture, let’s take a look at Mr. Donald Sterling. After a series of racist remarks surfaced the internet, the owner of the Clippers’ basketball team was thrown into a fire of angry backlash. Paly students shared their voices, and so did others across the map. In the end, Sterling ended up being banned for life from the National Basketball Association, as NBA commissioner Adam Silver took a firm stance against racism and united the entire country against it as well. Sterling’s consequences were met with pleasure from mass audiences who feel that such radical statements have no place in our nation’s progress.