Superintendent to step down after 2013-14 school year

After nearly seven years on the job, Palo Alto Unified School District Superintendent Kevin Skelly has announced his resignation, which will go into effect June 30. 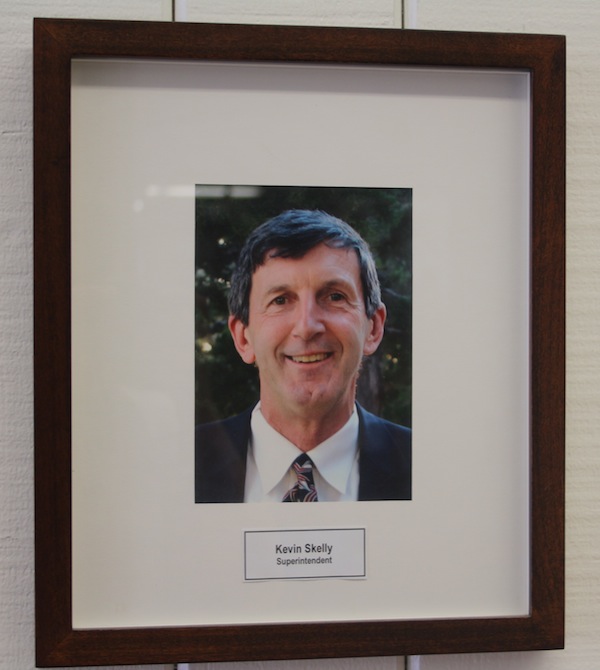 Palo Alto Unified School District Superintendent Kevin Skelly plans to resign June 30, according to an email he sent out to the Palo Alto community. Skelly has served as superintendent since 2007 after an extensive career in education and administration, according to his biography on the PAUSD site. Photo by Emma Chiu.

Skelly emailed the announcement to the PAUSD community this afternoon, but had announced his intentions to the School Board in a closed session after the board meeting last Tuesday.

According to Skelly’s email, the main reasons for the timing of his announcement are that he wishes to give the board substantial time to find a new superintendent and that he desires to take more personal time in his life.

“I want the chance to spend some time dwelling in the possibilities for the next phase in my life,” Skelly said.

Over the next four months, Skelly hopes that the school board and Palo Alto community will work together to determine the characteristics and qualities the next superintendent should have, he said.

“The district community deserves a chance to have an inclusive, rich discussion about the characteristics they wish to see in their next superintendent,” Skelly wrote in his email. “That process, combined with the recruiting and selection of someone worthy of the talents and promise of our students, will easily consume the next four months.”

In his email and in an in-person interview, Skelly expressed that his plans after June are still unclear.

“I don’t have any plans right now for what I’m going to do next year,” Skelly told The Paly Voice. “We’ll see. I’ve been in education for 32 years. … This is my seventh year [as superintendent], so it feels like a good time to do something else, to think about what I want my next step to be.”

Despite serving as superintendent for nearly seven years, Skelly has no direct power in appointing his successor.

“In terms of [the] process, I might make some suggestions,” Skelly said. “But in terms of [the] decision of who it is or who it might be — that’s for the Board to make the call.”

Ken Dauber, former School Board candidate and one of Skelly’s main critics, reflected on Skelly’s tenure.

“I think it’s safe to say that it has been a tumultuous four or five years,” Dauber said. “I think Dr. Skelly has put forth a strong effort. He’s made some strong contributions and in some areas. I wish him the best. I would highlight particularly in terms of accomplishments the A-G graduation requirements, which I think was a really strong, positive contribution he made.”

“He [Skelly] has always been fair to me, and he seems like a good guy,” Tuana said. “It’s always interesting to see what happens and who will get anointed to be the next superintendent. When he announced his stepping down I said that I would now not have my basketball partner for the student-staff game.”

Moving forward, Dauber called for strong leadership skills in next the superintendent.

“We need district leadership that focuses on academic achievement and the social and emotional well-being of students and view those as connected,” Dauber said. “We need somebody who has a strong commitment to transparency and participation in the governments in the district.”

“It’s unfortunate to see him [Skelly] go,” Mackris said. “He’s a really nice guy. I’ve talked to him multiple times, and he worked really hard for PAUSD. I really value all the things he’s been able to help us with for the past few years. … It’s good we’re going to get a new person who I’m sure will also be very good.”

“I just have complete faith in whoever replaces him [Skelly] because that’s how PAUSD works,” Edholm said. “We lose people who are great, but we’re going to find someone better because that’s just how we roll.”

Dauber also noted the importance of the role of the community in the superintendent selection process.

“I think that we should take this opportunity to take stock of where we want to move forward in the next five to six years,” Dauber said. “It’s important that the selection process has a lot of community participation from a diversity of people. I think it’s really critical that we get the whole community involved.”

After a long career in education, Skelly says that he has enjoyed working with the community to create a positive environment for students to grow.

“There are a lot of parts of this job that I’ve really really enjoyed so it has been a lot of fun,” Skelly said. “The kids in this district are just extraordinarily competent and just good kids. You guys are awesome. My favorite part is watching kids do the things they do in schools whether its journalism, sports, or track and field. … I just like being a part of that atmosphere.”