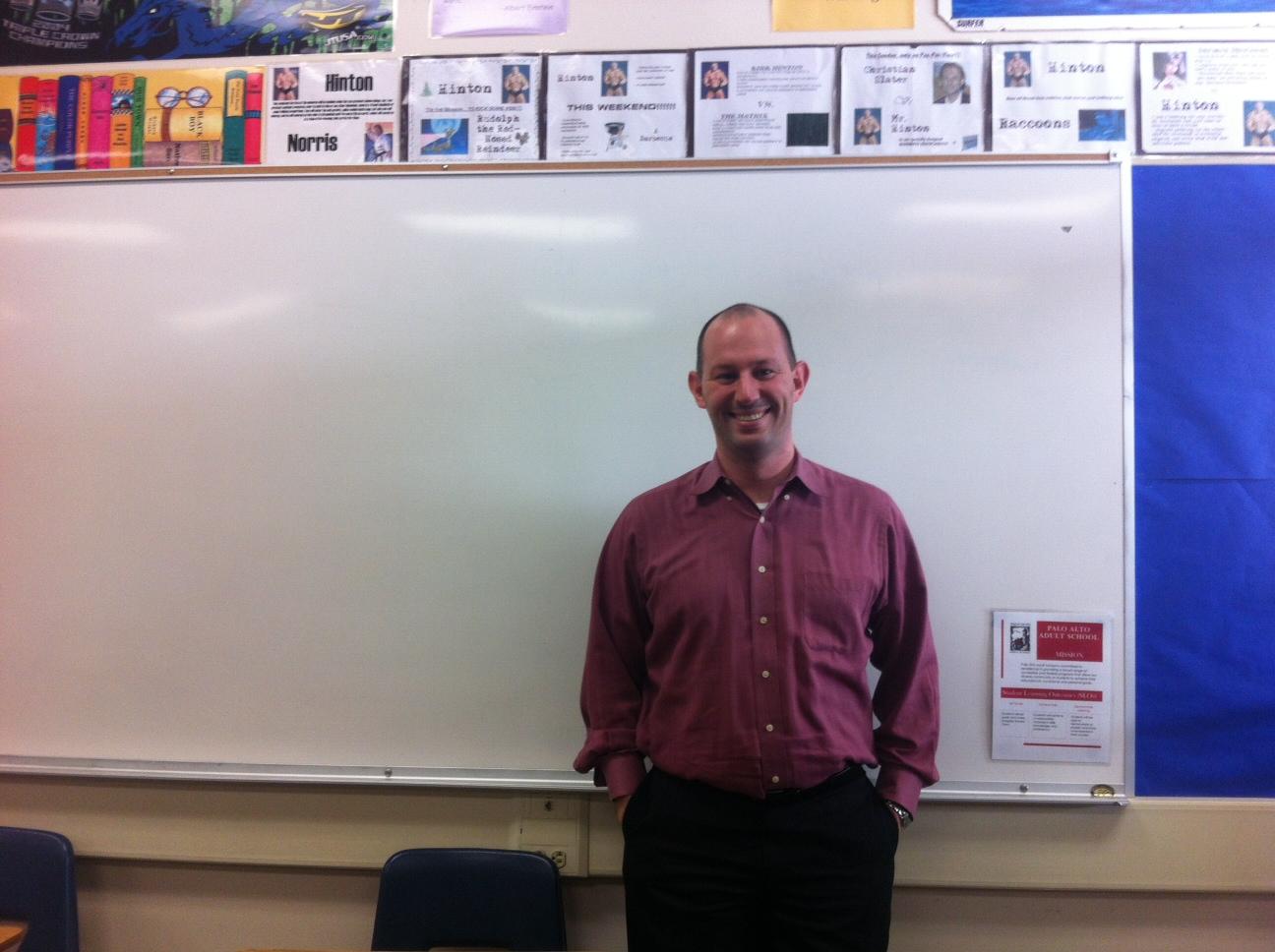 English teacher Kirk Hinton stands at the front of his classroom. Before coming to Paly, Hinton taught in Normandy, France. Photo by Paige Esterly.

As a student, I always wonder about the past lives of teachers. Was Ms. X a foreign pop-star in her twenties? Did Mr. Y spend his teenage years fighting crime as a masked super-hero? And although English teacher Kirk Hinton is no ex-lion tamer, his story is interesting nonetheless.

Growing up, Hinton had no idea he’d end up as a high-school English teacher.

“[When I was in school] I was very mechanically inclined,” Hinton said. “Math and science were my favorite subjects…they made sense. They were both very easy for me.”

Entering college, Hinton was prepared for a life of STEM (Science, Technology, Engineering and Mathematics) work, declaring a mechanical engineering major. However, nearing the end his collegiate education, Hinton made the choice to change his major and flip his future in the opposite direction.

“I knew I didn’t want to go into engineering as a career,” he said. “I had started working with teenagers during the summer at summer camps and summer schools and stuff, and I loved English in high school; it just wasn’t the easiest for me. So then I decided to change my major.”

After at last satisfying his academic requirements, Hinton was free to settle down and pursue his career as a high school English teacher. However, Hinton opted for a much more adventurous option.

“After I graduated, we [my wife and I] got married and we moved to France to teach conversational English in French high school,” he said.

Hinton moved to Normandy and began teaching, finding France very different from his life in America, but quite welcoming nonetheless.

“A lot of the French looked at us like we were crazy because we’re Americans and Californians, but being in Normandy where the invasion [during World War II] was, people remembered what America did for France,” Hinton said. “They have a whole society of young French people who go to the cemetery and put down flowers and American flags.”

Eventually, Hinton and his wife returned to America to fulfill their desire to live in the Bay Area, just a stone’s toss from San Francisco, and, well, you know the rest. But even now Hinton does more than sit around grading papers and reading books on grammar.

Editor’s Note: Paly students – if you have a favorite staff member, be it a teacher, office worker, coach or maintenance worker, and want to see him or her interviewed and recognized on The Paly Voice, leave a comment below.