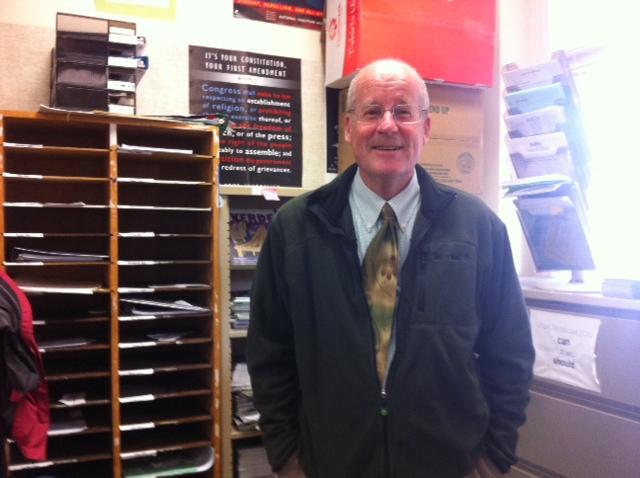 Jack Bungarden is known throughout Palo Alto High School for being the commander-in-chief of Paly’s famous (or infamous , depending on your opinion) Advanced Placement United States History class. Although it may seem difficult to picture Bungarden as anything but a history textbook in a fun necktie, there is, in fact, more to everyone’s favorite U.S. history educator than simply an extensive knowledge of American Revolution trivia and a fascination with Franklin D. Roosevelt’s Depression-era “alphabet soup.”

Bungarden was born and raised in Southern California as the second oldest of five children. As a high-schooler Bungarden was a tennis player and student government officer, as well as a budding historian.

“[History] was my favorite subject,” Bungarden said. Well, no surprises there.

Bungarden knew he wanted to be a teacher from a young age, but did not go straight from school to teaching, instead choosing to spend some time in the United States Armed Forces. His military background and extensive marching knowledge even scored him the Oscar-worthy role as an extra in the 1978 Hal Ashby film “Coming Home.”

“They needed people with short hair who knew how to march for a background scene,” Bungarden said. “We were supposed to be Marines getting on buses, so I spent a night with some of my roommates walking on a bus while they filmed us.”

Following his brief stint as a Hollywood superstar, Bungarden at last settled down as a good old high school American history teacher.

“I like high school and I like history,” Bungarden said. “[High school] is a good age. People are interesting.”

The love flows both ways, and both Bungarden and APUSH are student favorites.

“[Bungarden] really cares about all of his students and really wants them to succeed,” senior Cayla Wanderman-Milne said. “APUSH was a really good class because I learned so much and it was so interesting.”

“I really enjoyed APUSH,” Kenrick said. “It was my favorite class of junior year. ..He [Bungarden] is nice and easy to approach outside of class.”

Bungarden, however, believes his success in the teaching profession comes second to his top-notch fashion sense. When asked what his most important contribution to the Paly community is, Bungarden promptly answered, “that would be my excellent taste in ties.”

Editor’s Note: Paly students – if you have a favorite staff member, be it a teacher, office worker, coach or maintenance worker, and want to see him or her interviewed and recognized on The Paly Voice, leave a comment below.