Palo Alto High School’s latest construction project is now in motion after the recent release of the design plans for the new athletic center, which has an estimated date of completion of August 2015. 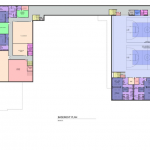 Tolbert Design Architects presented construction plans for the new gym and athletic facilities at a Board of Education meeting on Sept. 10, and the construction is scheduled to begin in June 2014, right after the end of this school year. The current gyms will be torn down completely and there will be changes made to both the interior and exterior of the new buildings.

Paly is preparing itself for the upcoming 14 month-long period of construction. Physical education classes will be held outside and in portables, and athletic events and games will be played at other venues in the district and at Stanford University, according to physical education teacher Peter Diepenbrock.

The gyms will consist of two levels. The main gym will be “sunken,” with the bleachers on the main level overlooking the gym floor on the lower level, Principal Kim Diorio said.

The design plans of the main gym also include a covered entry to the lobby, which will lead into a new training room, off-site coaches’ room, “Hall of Fame” corridor, ticket booth, concession stand and athletic store. Team locker rooms will be located on the lower level.

The small gym will hold a new wrestling room, dance and yoga room and pool locker room on the main floor.  The lower level will include a weight room, PE locker rooms and classrooms and storage space. 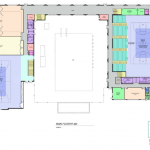 The gym plans include an enclosed loggia, or corridor, connecting the main (right) and small (left) gyms. The pool area will remain undisturbed during construction. Photo by Tolbert Design Architects.

A loggia, similar to the hallway connecting Haymarket Theatre to the front office, will link the main and small gyms together on the side of the pool closest to the bike racks.

The pool facilities will not be disturbed during construction, and the portables will also be used as temporary storage and locker rooms, according to Diepenbrock and Diorio.