10 things all freshmen should know

Being a freshman is hard. Here you are at a new school with seven new teachers, nearly 500 new classmates, and countless after-school activities and clubs. Don’t worry, I remember the feeling well. It was overwhelming and exhilarating, but mostly just really, really scary. But never fear! Here’s a handy-dandy list of 10 things to help ease the transition.

1) Upperclassmen aren’t as scary as you think they are. When 14-year-old me stepped onto Palo Alto High School campus at the beginning of my freshman year, I was overwhelmed by the huge swarm of seniors all decked out in their first day camo. Honestly, even when 17-year-old me stepped onto Paly campus just last week I was equally (if not more) overwhelmed as I had been three years prior. The moral of the story: Deep down, each of us seniors isn’t a whole lot different from an underclassman. You may think we’re older and therefore, cooler, but, honestly, we’re just as dorky and insecure as we were way back in August of 2010. Just as dorky and insecure as you feel right now at this very moment. So come say hi! Ask us for directions! We don’t bite, I promise!

2) Ditch the wheely backpacks. Maybe backpacks with wheels were all the rage back in middle school with their back-saving ease, but here at Paly they’re just a liability. With the block system your bag is rarely heavy enough to do any serious spine-compressing, so all that those wheels on your backpack are good for is getting stuck in the mud on the Quad.

3) Get Living Skills over with early. You do not want to be that second semester senior forced to rearrange your schedule to be stuck in a classroom with a bunch of sophomores while all of your senior friends are off taking a fun elective like Glassblowing.

4) If it looks like it may rain, bring an umbrella. Walking from class to class can get pretty wet, so rainboots are recommended, too. I’m sure you’ve all heard of Lake Paly, but just in case you haven’t, let me enlighten you. Our drainage system sucks. Last year, it rained so hard that they had to barricade the English classrooms with sandbags to keep them from flooding. Trust me on this one.

5) Get involved. Paly has a nearly infinite supply of fun after school activities to participate in, so take advantage of them! You’ll meet  cool people who share your interests and, who knows, maybe by your senior year you’ll end up president of the chess club.

6) Figure out how to sneak food during class. Safe bets include chips, bread and bags of baby carrots. Think things you can stuff into your backpack at a moments notice should the teacher 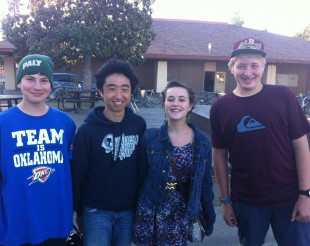 The author hangs out with some new freshmen pals at the Back to School Dinner. From left to right: Freshman Keith Scafe, freshman Leo Minami, senior Paige Esterly, freshman Jake Doughman.

walk past. Not such safe bets include burritos, messy sandwiches or anything in a thermos. Believe me, once I tried stuffing a lidless Tupperware filled with pasta into my backpack, and it didn’t end well.

8) Missing a class isn’t the end of the world. Take it from me. I am the queen of missing classes. Seriously, if you look at my attendance record you’ll see that last March I missed more physics classes than I attended, no exaggeration. I don’t mean to say I encourage cutting class, but missing one or two days every couple months is really nothing to worry about. Simply shoot your teachers an email explaining why you’re missing their classes, and probably 98 percent of the time they’ll tell you not to worry about it. The other 2 percent of the time they’ll tell you to come by during Tutorial to catch up. Either way, you’re golden.

9) Get to know your teachers on a more personal level. Obviously your math teacher isn’t about to become your new best friend, but it’s nice to build a relationship with him or her. It’s great to stop and talk to a teacher you had years ago in the hallway, plus you’ll be set when your junior year rolls around and you have to start thinking about asking for teacher letters of reccommendation.

10) Take Beginning Journalism your sophomore year, and then sign up to write for Voice! You won’t regret it.