The Paly Voice • May 6, 2013 • https://palyvoice.com/53946/culture/entertainment/review-famous-last-words-doesnt-live-up-to-its-title/

Review: "Famous Last Words" doesn't live up to its title 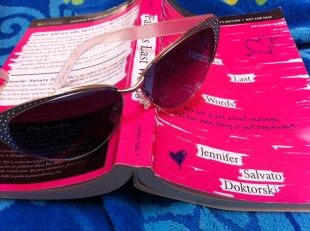 Doktorski’s book may lack substance, but it’s perfect for a summer read by the pool. Photo by Paige Esterly

Recently, The Paly Voice was asked by the promotional team to review the new young adult novel “Famous Last Words,” by Jennifer Salvato Doktorski before its official release. The book will be available in stores starting this July.

“I’m exactly where I want to be, and who I want to be,” are, yes, the “famous last words” of Jennifer Salvato Doktorski’s new Young Adult novel, “Famous Last Words.” And although the novel’s last line may not be particularly memorable, intriguing, original, or thought-provoking, it is a fairly good representation of the rest of the novel: cliche and predictable.

“Famous Last Words” tells the story of Samantha (“Sam”) D’Angelo, a 16-year-old intern at a local newspaper in a small town on the East Coast. The entirety of the plot is foreshadowed in the first five pages where Sam is introduced as an awkward five-foot-one high-schooler with “long, brown, style resistant hair” who works with a cute, older intern by the name of AJ and, well, you can guess what comes next. Yes, this is yet another story of the awkward, “loser” girl who, in the process of “finding herself,” gets a make-over that transforms her into a beauty queen, before snatching the heart of her love interest. Included is a sub-plot where Sam exposes the local mayor as an identity thief who steals money from his own mayoral dynasty, and thus becomes the town’s star journalist. However, this is, for the most part, eclipsed by the story of the budding romance between the two interns.

As fun (and easy) as it is to rip on this book, it does have some redeeming qualities. The writing isn’t phenomenal (Doktorski is no F. Scott Fitzgerald)  but I didn’t once find myself cringing at an awkward sentence or an unfulfilling description. Additionally, although Sam is, in general, your average, stereotypical teenage protagonist, her narration does provide some snarky humor, as well as moments of actual insight. Doktorski (obviously) was 16 once, and, although Sam’s story is rather cliche and unrealistic, her voice rings true, making readers feel surprisingly safe and comfortable within its pages.

The bottom line: “Famous Last Words” is not an example of timeless literature. It is not in the same class as “The Great Gatsby,” “Gone With the Wind”,  or “A Tree Grows in Brooklyn.” No, “Famous Last Words” is the kind of book you take out to the pool to read while lounging on your towel. It’s the kind of book you only pay half-attention to while the other part of your brain is preoccupied with the cute lifeguard two yards away. It’s the kind of cliche, teenage romance that only seems appropriate to read when it’s 90 degrees out and all your friends are on vacation and there’s nothing worth watching on TV. However, there’s something to be said for such lazy, summer days, just as there’s something to be said for this lazy, summer book. It’s not a stroke of genius, but Doktorski’s “Famous Last Words” is a safe, easy summer read.