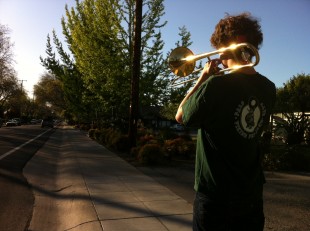 Junior Freddy Kellison-Linn practices marching with his trombone. Kellison-Linn, along with the rest of the Paly band, will be marching in the May Fete Parade Saturday, May 4. Photo by Paige Esterly

Many students at Palo Alto High School are already looking ahead to the annual May Fete Parade, which will take place downtown the morning of Saturday, May 4.

For many teens, the parade and the fair that follows is a nice break from the stress of schoolwork, and marks the one day a year that the Palo Alto community gets together to just have fun and relax.

“It [the May Fete Parade] is a fun parade where the community gets to hang out together,” junior Aida Goma-Petit said.”It’s one time a year where we all get together just to have a blast.”

Goma-Petit has attended the parade for about six years now and says that there’s something for people of all ages.

“You can see how much fun it is for the younger kids who get to play fun games and get their faces painted,” she said.

Goma-Petit says that teens can have fun at the parade too.

“I like going [to the parade] because it’s a time I get to hang out with my friends,” she said. “After the parade my friends and I go and eat food or go hang out at the park, or somewhere on University [Avenue].”

In addition to watching the parade from the sidelines, many Paly students will be participating in the procession as well.

“Being in the parade is fun,” junior Cayla Wanderman-Milne said. “The atmosphere is exciting, and all the people watching are usually pretty excited also.”

Wanderman-Milne is part of Paly’s symphonic band, which marches in the parade every year. In general, band students enjoy this opportunity to get out of the classroom and play their music on the streets of Palo Alto.

Band members have encouraged their classmates to come out and watch the the festivities.

“It is a really fun event, and a great way to support your school band,” junior Freddy Kellison-Linn said.

Goma-Petit agrees that the parade is not to be missed.

“It’s fun, eventful and full of laughs,” she said.

For more information on the parade, please visit the city of Palo Alto’s website.