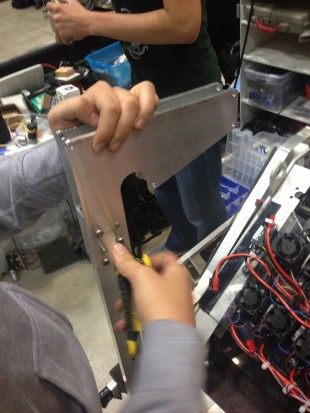 A team member labors over the robot’s climbing mechanism. Despite the disappointing season, the team encountered some success, finally fixing the troublesome climbing mechanism shortly after their final match. [Photo courtesy of Paly Robotics]

The robot’s climbing mechanism, which had been ineffective throughout the season, was fixed following the team’s last match at the Silicon Valley Regional competition in San Jose, according to programming captain, junior Freddy Kellison-Linn.

“After we couldn’t get a couple other parts implemented we started working on the part of the robot that would hang us from the pyramid at the end of the match,” Kellison-Linn said. “Even though we couldn’t get it to hang correctly in time for the end of the competition, we successfully fixed the mechanism after the fact, letting us end the competition with a sense of accomplishment.”

This success raised hope for the coming robotics season.

“It [the success] definitely did help us feel more optimistic for next season,” Kellison-Linn said. “It gave us something to feel like we accomplished this year, but next year we’re going in with a very good understanding of what went wrong this year and how to fix it.”

After the fact, accomplishments aside, the 2013 season was rather disappointing for members of team eight.

“We encountered several difficulties throughout the season that kept us from building the robot the way we had designed it,” Kellison-Linn said. “For example, the climber in its original form ended up wedging us underneath the pyramid instead of hanging on it. As seasons have gone, this one was disappointing but sometimes you do well and sometimes you don’t, so you just have to work on the things that went wrong.”

The robotics team plans to take their experience from the 2013 season to help make next season the best it can be.

“We have a good idea on how to improve our team structure and we’re actively working to involve new members and get people excited about engineering,” Kellison-Linn said. “Next year’s going to be great.”

For more information on this year’s robotics season, check out this other story on The Paly Voice.