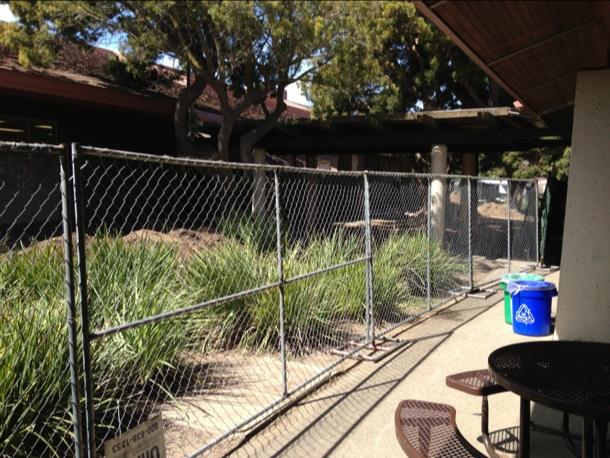 The blocked area wraps around the southeast corner of the 100 building. Photo by Spencer Carlson.

The blocked area at the north entrance of Palo Alto High School will be reopened in two weeks, according to Assistant Principal Kim Diorio.

Last week, construction workers blocked off the concrete area between the 100 and 200 buildings, leaving a fenced obstacle in the way of students walking onto campus.

“The work should be done by the time we get back in early April,” Diorio said.

The area was closed off in order for construction workers to access the underground electrical lines to connect the power to the new Media Arts building, according Diorio.

The blockage has made it hard for students to access the campus from the North entrance of Paly.

“The fence is incredibly annoying,” junior Audrey Debruine said. “I was on my way to class and I would have been on time but I realized I have to walk all the way around [the fence]. I almost asked a construction worker for a pass to class.”