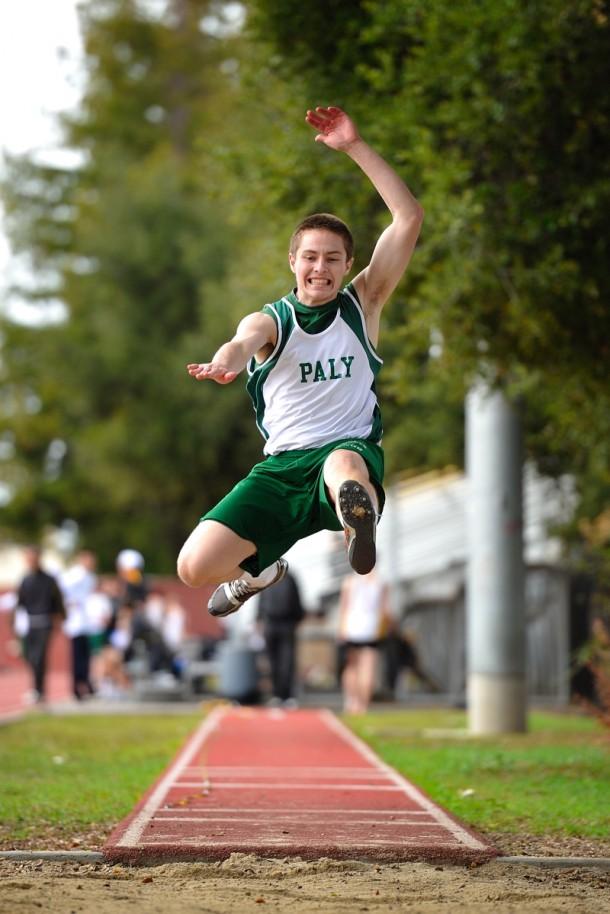 Kenny Jones partook in the long jump with no coach last year. This season, Tolu Wusu will coach the jumpers. “I like to try to get each person to maximize their ability versus just a goal,” Wusu said. Photo by Matt Ersted.

New Palo Alto High School Track & Field jumps coach Tolu Wusu strolls in to practice at 4:30 p.m. on a windy Wednesday afternoon, a good half hour after most of the athletes arrived.

“What have you been doing this whole time?” Wusu asked jumpers Victor Du and Grant Shorin jokingly.

Wusu, Paly class of 2003, went on to be an Exercise Biology major at University of California at Davis. He said that he hit the qualifying marks for the Olympic trials in 2007 for the triple jump, but after undergoing surgery on his leg, he never quite made it to the London Olympics. Wusu uses this experience to teach athletes to make sure they use the right mechanics and also enjoy every moment they compete.

“My surgery changed the way I view athletics, health and performance,” Wusu said.

Senior long-jumper Grant Shorin said that Wusu often has the jumpers change their techniques to become more natural, which in turn helps them jump further.

“The main goal is to use the body in a way that it is meant to be used, and as a result we will be healthier, enjoy jumping and jump higher and farther,” Shorin said. “A big part of what we do is unlearn the technique that we have been doing and understand how the body feels when we are doing things the right way.”

According to Wusu, it is important that young athletes are taught about the specific things they need to do to perform at a higher level.

Wusu said he hopes to help athletes understand this and succeed at Paly and beyond.

“I like to try to get each person to maximize their ability versus just a goal,” Wusu said.

Senior high-jumper Victor Du enjoys having a coach specifically to help with jumping, as opposed to last year when the jumpers were essentially self-coached.

“It’s a lot better than not having a coach when we just had to try stuff out, see what works and what doesn’t,” Du said. “It’s nice having someone that can tell us what to do and fix our mistakes and stuff like that.”

“He is probably the most interesting person I know,” Du said. “You could listen to him talk for five hours and never get bored, and he would never stop talking. I’ve had a couple practices when we just talked for two hours after practice.”

“Tolu is really interesting to talk to since he has been through a lot of things,” Shorin said. “After we finish practice, a lot of times, we will talk about random things and end up staying on the track for another hour. You never know what it’s going to be about, but it’s things like dance moves, eating contests, boxing matches, bike jousting and stories about all his injuries.”

All in all, Wusu enjoys working with high school athletes in particular because he can help them develop at an earlier stage to prepare them for later on.

“Being able to get people now and start working with them and figuring out the different things that may affect them in their future whether that’s in athletics or just health in general, is something that I think is good and very beneficial to address now,” Wusu said.

“Sorry, that was kind of a long winded response,” he added with a smile.