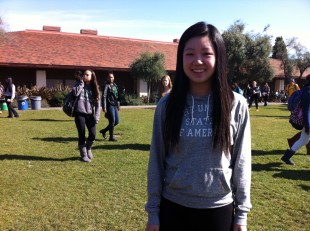 Olympic table-tennis player Lily Zhang is a junior here at Paly. She hopes to return to the olympics in 2016.

When is the last time you shared a conversation with an Olympian? For friends of Palo Alto High School junior Lily Zhang, the correct answer is earlier today.

The table tennis playing Zhang is just one of many remarkable Paly students, but nevertheless she has achieved more than most teenagers could ever dream of: competing in the Olympics.

Zhang began playing table tennis at the tender age of seven, and with nine years of practice under her belt she enjoys the achievements she has gathered about her.

“I’ve been on the US women’s team for about four years now but making it each year is still extremely exciting for me,” Zhang said. “Making the Olympics was definitely one of the biggest highlights of my career so far, but traveling to other countries and representing the US in international tournaments is also so amazing.”

But making the team is only part of the story for Zhang, who has also won numerous awards and accolades.

“Some [awards] that come to mind would be winning bronze at the Pan American Games, winning US Nationals, winning the North American Championships, being the youngest in the world to ever win a World Junior Circuit,” Zhang said.

Although she enjoys the prestige that comes along with being an award-winning athlete, the most important part of table tennis for Zhang is the fun of the game.

“I just love everything about table tennis,” she said. “It’s an extremely fast paced sport which I love, and although not many people know [it], a huge part of the game are the mental and physical aspects of it.”

Her love of, and of course success at, the sport have opened up many doors for Zhang helped shape her outlook on life.

“Table tennis has influenced me in so many ways,” she said. “Traveling to different places and meeting so many amazing people has given me a new perspective on the world and so many experiences that have helped me get through challenges.”

Although Zhang, like many high schoolers, is unsure of what her future will hold, she is confident that table tennis will play a leading role.

“I realize that school and an education are very important, but I also hope to continue playing [table tennis] for as long as I can,” she said. “My next big goals would be to make the 2014 Youth Olympic Games and possibly medal there, and then the 2016 Olympic Games.”

But even before the next round of Olympics Zhang has high hopes for her table-tennis career.

“I’m looking forward to playing in the Korea Open Pro Tour beginning of April as well as the North American Cup and then the World Championships hosted by Paris in May,” Zhang said.

Despite her passion for table tennis, Zhang makes a point to take time out of her busy life for fun and relaxation.

“I don’t usually have much time outside of table tennis and school, but when I do get an occasional free day I like to spend time with friends or just relax at home,” she said.