In an industry jam-packed with movies aimed towards the younger generation, “The Best Exotic Marigold Hotel” finally provides a film for an older audience wishing to spend their nights away from movies centered around teenage romances or high schools. 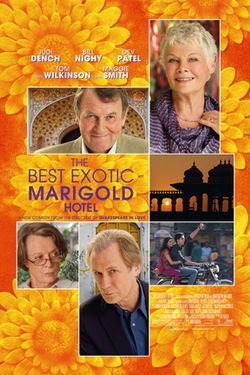 “The Best Exotic Marigold Hotel” was initially released in the United States on May 4. The movie follows seven British seniors and their retirement to the color and unfamiliar India. Photo by 20th Century Fox.

Directed by John Madden (“Shakespeare in Love”) and based on Deborah Maggoach’s novel, “These Foolish Things,” “The Best Exotic Marigold Hotel” was released in the United States on May 4. It features a cast consisting of some of the finest English actors and whose performances do not disappoint. Judi Dench, Bill Nighy, Penelope Wilton, Maggie Smith, Tom Wilkinson, Ronald Pickup and Celia Imrie play a group of pensioners leaving behind their beloved and familiar England in search of a more affordable and exciting retirement spot.

The movie begins by quickly introducing the characters in a short montage. Evelyn (Dench) is a recently widowed housewife who must sell her house in order to pay off her husband’s debts; Graham (Wilkinson) is a retried high-court judge who desires for a change in scenery; married couple Jean (Wilton) and Douglas (Nighy) are in search of an affordable retirement after losing all their savings in their daughter’s startup company; Muriel (Smith) is in need of an inexpensive operation for replacing her hip; and singletons Madge (Imrie) and Norman (Pickup) are simply seeking to find love again. All are drawn to India for a plethora of different reasons, and all, upon arriving, discover that The Best Exotic Marigold Hotel is not as beautiful as advertised.

Initially, some struggle with adjusting to the bustling and colorful lifestyle that surrounds the hotel whereas others jump right in. However, by the end of the film, each character has discovered exactly what he or she was searching for, having experienced the stereotypical revelation that occurs in almost every movie surrounding Asia (“Eat Pray Love” anyone?). Even the hotel’s energetic and optimistic manager, Sonny (Dev Patel), transforms by the end of the movie.

The film’s characters are simple and straightforward; however, the plot is occasionally overwhelmed by the multitude of varying storylines, and some of the characters’ transformations feel rushed or forced. Rather than adding to the movie, the immense amount of different characters in fact decreases the appeal of the film because none of the individual stories are able to fully develop, preventing any emotional or sentimental attachment that could have otherwise been formed had the audience known more about the characters.

Additionally, due to the time crunch (seven stories, eight if you count Sonny’s, in a mere two hours), many of the conflicts are resolved too neatly and unrealistically. Furthermore, the characters talk of all these grand and beautiful locations and life-changing experiences, but very rarely do we get to see or witness the action, and all we receive are vague explanations.

Nevertheless, the film does have some degree of charm and attractiveness to it. Centering on the challenges that the elderly face, “The Best Exotic Marigold Hotel” addresses issues that are rarely mentioned in the film industry. It touches topics such as regret, loneliness and death while throwing in the occasional corny joke to lighten the mood.

The movie, with its pros and cons, ultimately paralleled one of the most memorable quotes of the film. As Sonny attempts to relieve the concerns of his customers, he continually says, “Everything will be alright in the end, and if it is not alright then it is not yet the end.” Indeed, the characters, plot and the film itself were alright in the end.

Here is the official trailer by Fox Searchlight:
[youtube http://www.youtube.com/watch?v=BHc_ZTEH0VU&w=560&h=315]