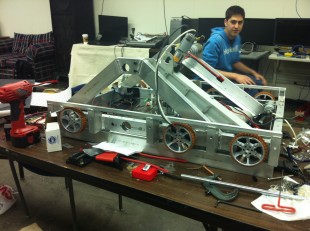 As of Thursday, Feb. 14, Paly’s robot is almost completely constructed. Once finished, it will have to compete against other high schools’ robots to shoot frisbees into slots. Photo by Paige Esterly.

Paly’s team is part of For the Inspiration and Recognition of Science and Technology, a program that aims to bring advanced science and technology to students, and competes in the FIRST Robotics Competition, and build season is the first leg of the journey.

“Build season is the most intensive time period of any FRC team,” team webmaster Sergey Smirnov  said. “We have only six weeks to brainstorm, plan, prototype, test and build an entire robot.”

Paly’s robot has been entirely built and programmed by students on the robotics team under the supervision of Paly Computer Science teacher Chris Kuszmaul and helpful parent “mentors.”

“We are an almost completely student-run team,” Smirnov said. “We design the robot, build the robot and compete with the robot by ourselves with the help and supervision of mentors.”

Once finished, the robot will compete in competitions against machines built by other high-school level teams, much like football or soccer. This year’s competition requires the robot to throw frisbees through slots on opposite walls.

“This year, we have to build a robot that can play FIRST’s version of ultimate frisbee,” Smirnov said. “Last year, we built a robot that could play basketball, and we went to nationals in St. Louis with it. In the past, we’ve also had games of soccer, race car driving, inner tube hanging, etc.” 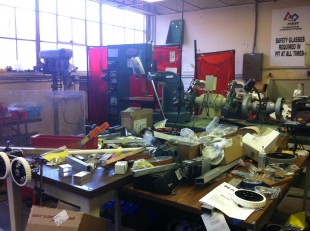 The robotics work area is filled with macheniery, and nobody is admitted into the fenced-off area without safety goggles. Photo by Paige Esterly

Smirnov is confident about this year’s competition.

“I can’t give off many details about it since we don’t want too much publicity on our progress for now; after all, it is a competition, but we do have a pretty fast robot,” he said. “I feel that with what we have designed and prototyped, we will probably make some opposing teams feel worried.”

But FIRST is about more than just the competition, and the FRC puts emphasis on the learning and sportsmanship aspects of the game.

“It [FRC] is also about learning about working with a strict time schedule, working in a team, learning programming, machine code, networking and gracious professionalism,” Smirnov said.