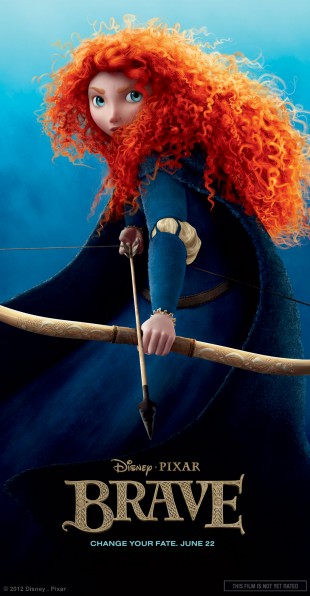 As the first female protagonist to emerge from the ground-breaking Pixar Animation Studios, Merida (Kelly Macdonald), the fierce flame-haired archer struggling to make her own decisions in the face of tradition, must be sick of trying to live up to everyone’s sky-high expectations — those of her parents and those of the audience.

“Brave,” set in the Scottish highlands, might be characterized by cynics as a conventional fairy tale with a predictable plot; the movie is only saved from a barrage of flames by its stunningly beautiful aesthetics, produced with Pixar’s new animation system that was rewritten for the first time in 25 years.

After all, the animation studio that produced such thought-provoking films as “Up” and “WALL-E” could have surely done better than to use the old be-careful-what-you-wish-for plot and the currently trending independent-female-archer-that-can-totally-kill-all-the-boys-in-an-instant character archetype (think Katniss Everdeen). With directors like Mark Andrews, Brenda Chapman and Steve Purcell, all of whom had been involved with the Oscar-winning “Ratatouille,” audience expected nothing short of a miracle.

Unlike most movie critics, however, I did not go to the theater to watch another mind-blowing Pixar animation. I simply went to see the movie because I didn’t feel like joining my friends in seeing yet another superhero-saving-pretty-girl movie. To me, Merida’s “I’ll be shooting for my own hand!” beats a superhero movie any day.

Putting on my 3D glasses without much expectation, I was immediately transported to the land of legends — the boisterous medieval feasts, the awe-inspiring panorama of cliffs overlooking forests, the mysterious paths of the will-o’-the-wisps. Smooth animation, detailed designs and the hauntingly beautiful soundtrack contributed to an atmosphere that was all at once convivial, majestic and dream-like. The creators made great use of 3D technology to enhance the vivid and colorful images but not overdone to make the special effects distracting.

What I found most refreshing is that unlike traditional fairy tales in which the plot focuses on romance, “Brave” makes familial bonds the central motif. As Merida rebels against her parents’ wishes to choose a suitor from one of the major clans, her strong will comes head to head with that of her mother, Queen Elinor (Emma Thompson). To free herself from restricting traditions, she makes a dangerous wish that (surprise, surprise) comes true.

But although the plot is fairly predictable, the characters are realistic and complex. The mother-daughter interactions made for many poignant moments, while King Fergus (Billy Connolly), the triplet brothers and the suitors gave both witty and ridiculous comic relief. As a hero’s journey, both mother and daughter triumph in their struggle to understand their roles in family and society.

As a feminist statement, “Brave” emphasizes the strength and courage of women, whether they dutifully follow gender roles like Elinor or defy traditions like Merida. It highlights the complexity of female relationships that often goes unexplored in many fairy tales and children’s animations. Perhaps, the male characters could have been developed more deeply. But for a movie that focuses on women, the creators have succeeded in providing boyish cunning through the triplets as well as loyalty mixed with craziness through King Fergus.

In “How to Read Literature Like a Professor,” Thomas C. Foster explains that writers use some stories over and over to give the audience a sense of comfortable familiarity and to make the story resonate with past works of art and literature. “Brave” is one such instance in which an age-old plot of magic, growing up and discovery is given a fresh and enchanting spin that connects modern audiences to the past. In the beautifully magical world that new technology has created, the audience is told a bedtime story in which they are forced to notice that, unlike Cinderella or Snow White, a heroine has shot for her own hand and hit the bull’s-eye.