Social Studies to play on the Quad 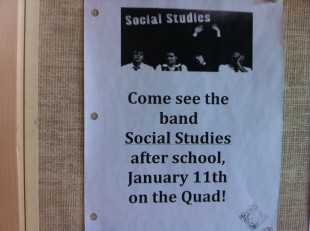 A poster handing on a bulletin board advertizes tomorrow’s Social Studies concert. Their performance will be the first of a series of live bands to play on the Quad. Photo by Paige Esterly.

The band, based in nearby San Fransisco, is made up of five musicians: Natalia Rogovin, Michael Jirkovsky, Jesse Hudson, Ben McClintock and Tom Smith. They have already produced two albums, and have a third on the way, according to their website.

This performance will be the first of many live concerts after school and during lunch, according to Associate Student Body President senior Jessica Tam.

“We got a lot of student requests asking for live music performances on the Quad,” Tam said. “We were thinking about having student bands play, but we also decided to ask professionals to come perform.”

ASB has already lined up more musicians to play this month. According to Tam, professional band Goodnight Argent will play next Friday, Jan. 18, at lunch, and a student band is planning to perform on Jan. 25.

“We hope to make this a recurring thing,” Tam said. “We’re looking for lots of student bands, as well as student DJ’s to perform. If you want to play, just email Mr. [Matt] Hall to set up a time, or just come talk to anyone in ASB.”

“They [Social Studies] will be out on the Quad as soon as school ends, and students should be ready for a really good concert,” Tam said. “There will be CD’s and T-shirts for sale a little later, after they play, for students to buy if they want.”

Senior Julian Hornik, who has seen Social Studies perform before, agrees that tomorrow’s performance will be a good one.

“They play indie rock,” Hornik said. “The beauty of indie musicians is that, generally, because they’re not overproduced they play great live shows, and Social Studies is no exception.”