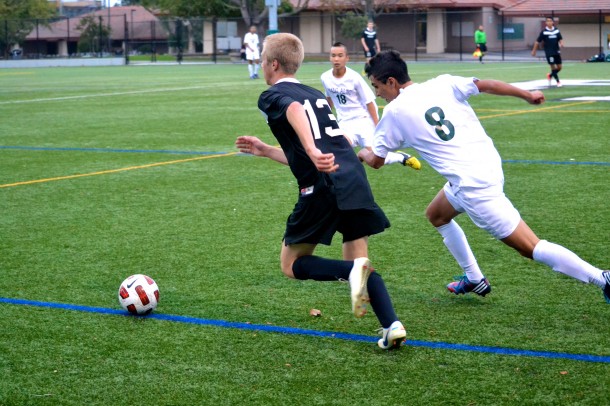 Christian Huard (’13) sprints after the ball along side a Mountain View defender during the sixth game this season for the Palo Alto High School boys varsity soccer team. The Vikings lost 0-3. Photo by Levi Schoeben

Paly was on the defensive for most the game with junior goalie Tony Maharaj, putting up several saves but unable to stop all of the Spartans’ shots.

According to senior defender and co-captain Kirby Gee, the first half opened with a relatively balanced opposition between the two teams, but a turning point occurred after Mountain View scored the first goal.

“After the first goal, I knew it would be difficult to pull out a victory,” Gee said. “They had a solid defensive line and it didn’t look like they were going to give up a goal.”

Several of Paly’s offensive players made moves down the field in the first half, but never successfully scored. Senior attacker Skylar Felt dribbled the ball up to the goal line from midfield, out-sprinting the Spartans’ defenders and nearly scoring on multiple accounts. Seniors attackers Gen Murphy and Chris Meredith also fired shots, but the Mountain View goalie successfully blocked them.

In terms of defense, Maharaj felt the team was strong but could improve on working together.

“Our defense was great,” Maharaj said. “We need our team to defend as a unit to make it difficult for opposing teams to get through. We also need to work on working the ball up the field instead of playing ‘kickball.’ Our forwards can’t do everything themselves.”

By the second half, Paly, down 0-1, could not recover and let two more goals slide into the net before the final whistle was blown.

Overall, Gee was not impressed with the team’s performance and hopes to make several changes in strategy for the upcoming games.

“We played awful,” Gee said. “Mountain View beat us in every aspect of the game. We need to put more pressure on the ball and posses the ball more. … It starts with pressure and control.”