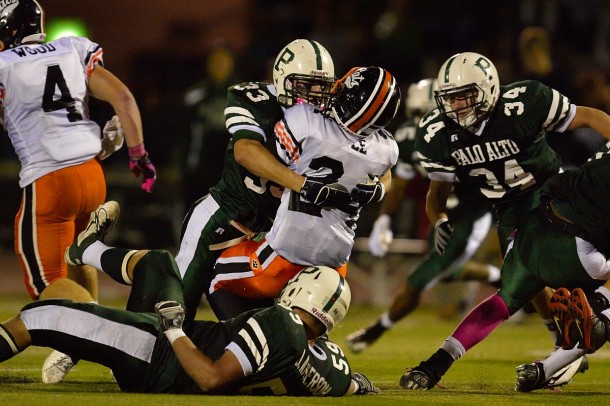 The victory pushed the Vikings into a three-way tie for first place in the SCVAL (Santa Clara Valley Athletic League) De Anza Division. Los Gatos, who was previously undefeated in league play before the loss, and Milpitas are also tied with Paly atop the league standings. All three teams have a 3-1 record in De Anza league play.

An outburst of explosive offensive plays in the first half was enough to hold off the Wildcats for the remainder of the game. Using a stifling defense, the Vikings wore down the Wildcats, who failed to score until late in the fourth quarter.

The Paly offense also struggled to sustain drives, but got some help from early big plays to seize control of the game.

Junior quarterback Keller Chryst had yet another solid game, throwing for three long touchdown passes.  The first came on a 51-yard bomb in the second quarter to junior receiver Malcolm Davis, who raced past the defender for a wide-open touchdown. Five minutes later, Chryst hooked up with senior wide receiver Jayshawn Gates-Mouton on a 61-yard pass to open up a 19-0 lead heading into halftime.

Gates-Mouton added another 46-yard touchdown reception in the third quarter to extend the Vikings lead to 25-0.

The Los Gatos high powered offense, which had averaged 34 points in its previous six games, could not get past a determined Paly defense.  Junior linebacker Andrew Frick led the charge with two sacks and a fumble recovery late in the game.

“We worked all week; we knew what was coming,” Frick said. “We executed, and we went crazy.”

“They [Los Gatos] had no answer for us,” Hansen said.  “We knew their plays before they called them.”

The stands were packed in honor of Paly’s Senior Night. The Paly football team recognized its 17 seniors before the game. Seniors Matt Tolbert and Jayshawn Gates-Mouton delivered key performances in the victory. Running back Matt Tolbert opened the scoring in the first quarter when he cruised in for a 64-yard touchdown after sprinting past the Wildcats’ defense. Gates-Mouton also contributed with his two touchdown receptions.

Also in attendance was Paly alumni and San Francisco 49ers head coach Jim Harbaugh.  He was constantly followed by a pack of admiring fans hoping for a picture or autograph.

“I had my first night off in three months, and Earl Hansen is my old coach,” Harbaugh said.

Halas wanted to acknowledge the defense for what it brought to this Paly squad, as it held the dominant Wildcats offense to an insignificant touchdown in the waning seconds of the game.

“We’ve got some explosive guys on offense, we’ve got the best QB in the world or whatever,” Halas said.  “But we play great defense at this school. People forget that.”

The Vikings’ next challenge will be Saratoga High School, who they will face at 7:30 p.m. next Friday at Paly’s Hod Ray Field. 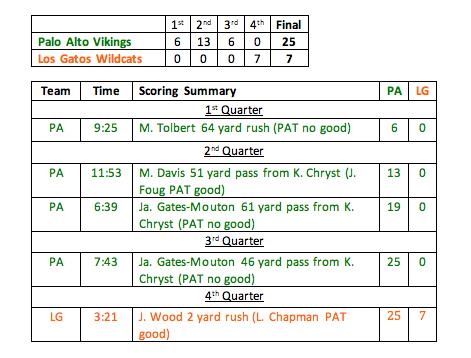