Political debate to be held today in the ERC 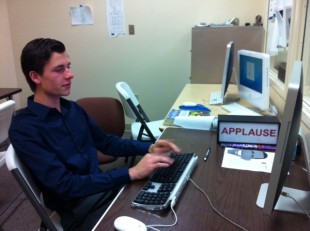 Senior Spencer Carlson prepares for his debate later this afternoon. He, along with Ben Hawthorne, will be representing the Democrats this afternoon in the ERC. [Photo: Paige Esterly]

Members of the Libertarian and Democrat clubs, along with a Republican representative, will be holding a political debate at 2:30 p.m. today in the English Resource Center at Palo Alto High School.

Libertarian Club debaters will be Aaron Slipper and Thibault Serlet; for the Democrats, club members Ben Hawthorne and Spencer Carlson will be debating. Although Paly does not have a Republican Club, senior Yasna Haghdoost will be representing the right wing viewpoints of the Romney/Ryan campaign.

Those who attend can look forward to a discussion regarding the economy, civil liberties and foreign policy, according to Carlson.

The idea originally stemmed from Serlet, the president of the Libertarian Club, who discussed the idea of hosting a debate with librarian Rachel Kellerman earlier this year. Kellerman responded enthusiasticly.

“I think it’s really important that everyone pay attention to the political process,” Kellerman said. “High school students are the future of the country, and people really need to know what it takes to be an informed voter.”

This is the first political club debate in Paly history, and the Libertarians are excited for the challenge.

The Democrats have been looking forward to the debate, too.

“Ben and I have been working with Esha Datta [the president of the Democrats club] to prepare,” Carlson said. “We’ve been coming up with arguments, trying to figure out what the Libertarians are going to argue.”