The Palo Alto High School football team (1-1) was defeated in dramatic fashion by the Archbishop Mitty Monarchs (3-0), 28-27, Friday night on its own turf.

Two years ago on a rainy night November, the Vikings and the Monarchs met at the  Hod C. Ray field in the first round of the Central Coast Section playoffs, and a rivalry was instantly born.

With the Vikings down just minutes left in the fourth quarter and a perfect record on the line, then-senior reciever Davante Adams took the game into his own hands and made a spectacular play down the sideline to win the game. To make the script even more incredible, the Vikings would go on to win the CIF Division II State Championship that year, and in turn, keep their 14-0-0 record intact, proving just how intense the competition of that game was.

Yet in this game, the Vikings fell on the short end of the stick and the Monarchs returned the favor with a hard-fought victory of their own. In the back and forth contest that echoed their previous clashes, the Vikings lost a close game characterized by stifling defense and big plays that shifted the momentum.

The Monarchs received the ball first and took advantage of a fumble on the kickoff to secure field position on the Vikings’ 35-yard line. Then, they quickly exerted their disciplined, run-first offense as they jumped out to a quick 7-0 lead with a 15-yard run up the middle.

In the next few possessions, the Vikings came close to evening the score with multiple deep passes and broken tackles, but failed to produce any offensive output in the first quarter.

However, the Vikings recovered a fumble on the first play of the second quarter, deep in Monarch territory. The Vikings quickly evened the score as senior running back Matt Tolbert took it in from seven yards out.

In the following drives, commanding defenses on both sides of the ball forced successive three-and-outs.

It wasn’t until 4:35 left in the second quarter when the scoring picked up again, when junior quarterback Keller Chryst found junior receiver Malcolm Davis exploding down the middle of the field for a 46-yard touchdown.

Almost immediately, the Monarchs answered with a 99-yard touchdown on the ensuing kickoff, tying the score at 14 all. Then, with six seconds to go in the half, Mitty scored again with a 16-yard strike into the front corner of the endzone, putting the Monarchs up 21-14 at the half.

The second half stood mostly stagnant on the offensive end, and both teams remained scoreless for the third quarter. For every opportunity that seemed to arise for the Vikings, that Monarchs would come up with a key tackle, sack, or interception.

With seven minutes left in the fourth quarter, the Monarchs seemed to have struck the final blow with a late touchdown to extend the lead to 28-14.

Yet despite the odds and the time remaining on the clock, the Vikings found the drive to fight back. Tolbert ran it home for another score four minutes left in the game to bring the score to within seven and inject some life into the home team and crowd.

On the next offensive drive, starting in the backfield with no timeouts remaining, Chryst orchestrated the well-oiled Viking offense into perfect position, finishing it off with a 64-yard touchdown pass to Davis and putting the Vikings within a point of the Monarchs.

As the crowd erupted in frenzy, the roar in the stands drowned out the play on the field. An extra point would have been enough to tie the game and send it to overtime, but an error on the snap and hold prevented the Vikings from getting an attempt off, putting the Monarchs ahead for good. Most of the crowd was still celebrating the touchdown when the mistake occured, and only moments later did the consequences sink in as the fans stood stunned at the sudden turn of events.

The Monarchs took a knee on the final play, securing the 28-27 victory over the Vikings.

While the loss was disappointing for the Vikings, it was not discouraging.

“I thought we were off and on,” head coach Earl Hansen said. “ I thought we were very good at times, we didn’t quit, we fought back. I think this is a young team that’s going to get better and better.”

As the first real test in the season, this matchup also revealed the team’s weaknesses and needs of improvement in the future.

“We have to have harder practices and just take it one day at a time, one game at a time,” Chryst said.  “I think we’re looking too much into the future and we just have to do everything we can do, now.” 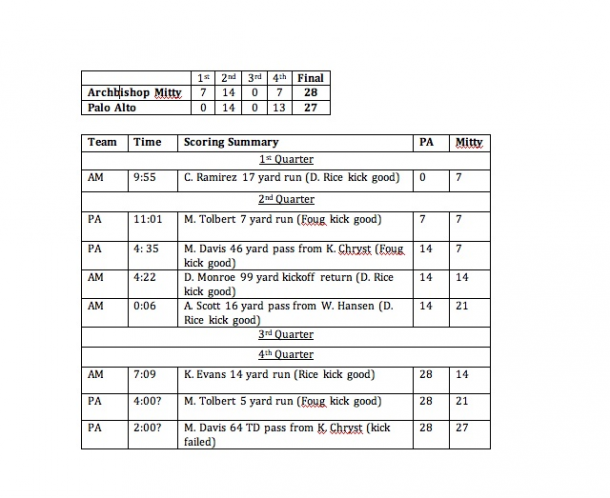