Opinion: Why Fox shouldn't have released the identity of Mark Owen 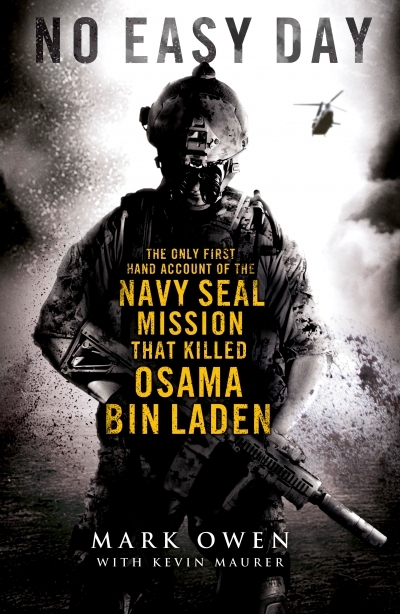 Fox News released the true identity of the Navy SEAL who wrote No Easy Day. The publication of the ex-commando’s identity created a lot of conversation around the ramifications of the moral decision made.Photo credit: Penguin Group (USA)

Mark Owen was originally the only name linked to an anonymous ex-Navy SEAL Team Six member’s first-hand account of the killing of Osama bin Laden, until he was identified and had his information released by Fox News late last month.

The ex-Navy SEAL wrote the book, No Easy Day: The Firsthand Account of the Mission That Killed Osama bin Laden, under a false name, to protect his identity.

The memoir was to be released, quite appropriately yesturday, Sept. 11; however, the release date was moved back up to Sept. 4 due to a surge in orders. A series of social network posts in late August 2012 and the book jumping to the top of the Amazon.com and Barnes & Noble.com bestseller list, from early publicty, required the original order of 300,000 copies to be increased to 575,000 to accomidate the heightened interest.

A controversial issue arose when the ex-commando was identified as Matt Bissonnette, 36, of Wrangell, Alaska by a Fox News correspondent. The Associated Press later reported that the identity was confirmed by a military official. Even by just releasing an ex-Navy SEAL’s name, that information can put him and his family at a huge safety risk. According to the Fox correspondent who reported Bissonnette’s name, ironically in an article he published last year, he himself wrote on how members of the raid team were protecting their anonymity due to safety and protection concerns.

Several Pentagon officials say, according to the Article “Was Fox News wrong to ID the Navy SEAL who wrote about killing Osama bin Laden?” on TheWeek.com, that the author could be prosecuted if he has revealed any classified information in his book. This is due to a nondisclosure agreement that binds Navy SEAL’s during and after their service to secrecy. In addition, according to Eli Lake at The Daily Beast, the Navy elite commando force “practice a Mafia-like code of omerta.” If an ex-Navy commando is to ever write a book they’re supposed to let the Pentagon first “scrub the texts of any classified information,” according to Lake’s interview with another Navy SEAL member.

Besides the issues Bissonnette has with the Navy SEAL’s nondisclosure agreement with the Pentagon, the publishing of the ex-commando’s identity brings up a bigger question of the moral rights and responsibilities journalist have.

I recognize the journalistic accountability Fox News took by deciding to publish the soldiers name, yet ultimately I believe it was something less of a consummation of the news and rather a senseless accessory to the story. While releasing names is part of the news outlets commitment and identifying the ones that the stories are about is a right journalist have, I don’t believe it necessary should’ve been exercised here. Releasing information as fact, once verified, is completely under the laws of freedom of speech along with freedom of the press, however in this specific instance, by naming a war hero, while at the same time putting him in danger, provided a moral dilemma for the journalists at hand.

It can be argued that by writing a book in the first place, Bissonnette was putting himself out into the media and no longer was respected by the shadow of secrecy the other men of Team Six had through their individual silence. And consequently, by speaking to the world, he now is open to journalists and the press, releasing his once protected anonymity.

In response to that, its important to judge whether his decision to write the book was based on wanting to educate America and readers of his account, or if it was one simply to bring him to fame and fortune. If the truth is the latter, then I side with Fox on reporting the name of the soldier because once he uses his own encounters to seek a reward than his privacy should no longer be morally protected by the publication or news outlet. More specifically, the press is now releasing the true name of the fame seeking author of a book, rather than it solely being the identity of a undisclosed war hero.

On the other hand, if Bissonnette chose to protect his name in order to be able to tell his story and educate his readers while only wishing to publish his memoir as a document of events and first hand accounts, then I strongly support the anonymity Bissonnette sought out through his false handle. If the novel was exclusively released under the intent of publishing his story and encounters, then I expect some consideration of the media for Bissonnette’s decision to remain unamed. And moreover, if Bissonnette chose to keep his name confindential, especially being the respected war hero he is, then Fox, owed him that certian privicy.

Some may argue, nevertheless, that if the identity of the ex-Navy SEAL member wasn’t released along with the book itself, it would take away credibility of the story. The argument that without proving that the author was in fact part of SEAL Team Six, and that his accounts are verifiable, it renders the story only suitable as controversial war fiction.

The premise for this argument really doesn’t check out in any manner. Even now that the name of the man is public knowledge, is there any more verification that he was in fact a Navy SEAL. There aren’t endless online records of all of the names of ex-Navy SEAL’s availible to the public eye, as the SEAL’s, and even more so for Team Six, are a highly classified organization. So even by releasing the true name tied to the soldier’s pseudonym, the verification can’t be proved with the name alone. While The Associated Press did confirm that Mark Owen was Matt Bissonnette and that he was a confirmed member of the raid Team, they could’ve done the same thing without having to release the name of the commando himself. Fox News merely could have verified Mark Owen’s identity as a Navy SEAL, admitting that it was a pseudonym and that the soldier wished to remain anonymous. This way the book could be acknowledged as coming from a confirmed source, while still protecting the identity and safety of the ex-Navy SEAL.

In the end, Fox went ahead and published the name and backed their decision to do so. Situations like these can only be reflected on and viewed as examples in our own reporting for the future. Journalists must always make the moral decision of what they publish and how they portray their information, for journalism is more than just recording facts, it’s telling a story.