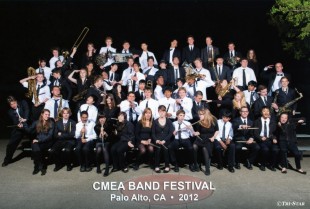 The band’s first performance for the 2012-13 season will take place this Friday night. Last year’s band was a favorite at football games.

Palo Alto High School’s Symphonic and Concert bands will combine to play as The Paly Pep Band Friday night, Sept. 14, when the football team takes on Archbishop Mitty High School in its home-opener.

It will be the first musical performance of the 2012-13 school year.

Both Concert Band, made of up freshman, and Symphonic Band, composed of sophomores, juniors and seniors, have been practicing for their first performance.

“We’ve practiced marching out on the track almost every day,” Weitzman said.

The public is looking forward to the band’s debut.

This year, the band  has expanded its selection to include a collection of new, school-spirit-inspiring songs, such as Bruno Mars’s Runaway Baby. However, they will still be performing old classics, such as Land of 1,000 Dances, and, of course, All Right Now and Green and White.

Weitzman is looking forward to the season of football games to come.

“One thing’s for sure, you can expect a whole lotta pep,” he said.