The Paly Voice • May 25, 2022 • https://palyvoice.com/167667/news/sheriff-candidate-kevin-jensen-stresses-experience-driven-reform/ 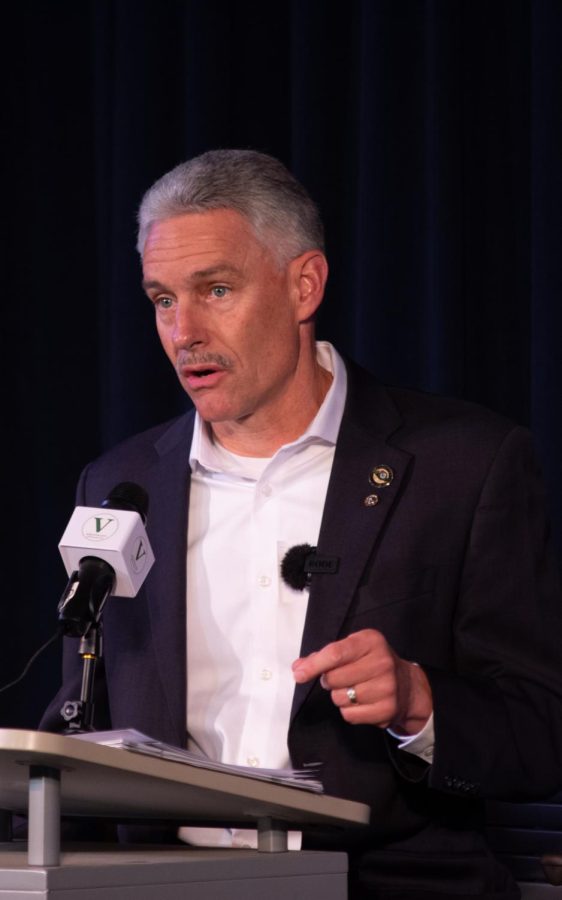 Former Sheriff’s Cpt. Kevin Jensen, a candidate for Santa Clara County Sheriff, is emphasizing his goal to reform the culture in the sheriff’s office towards accountability and integrity.

Jensen, who spoke with students in the Palo Alto High School Media Arts Center on Friday, served for nearly three decades in the SCC Sheriff’s Office, according to his website, and said he hopes to decrease political polarization within law enforcement.

“I’ve got [a coalition of] right, left and center,” Jensen said. “Three years ago, when I saw my family eating each other alive on Facebook … I became a no party affiliate … If we’re not having dialogue, what are we really doing?”

Jensen, who retired in 2013, said he observed corruption within the SCC sheriff’s office throughout his career. Jensen said he decided to run for sheriff a second time, his campaign in 2014 being the first, in part because of the accusations of corruption toward current sheriff Laurie Smith.

“For 12 years, I’ve been calling out the corruption,” Jensen said. “It [the SCC sheriff] shouldn’t be somebody who’s part of the problem. It should be somebody who’s called out courageously an issue and has fought.”

According to Jensen, a shift in leadership will encourage the department to hold itself to higher moral standards when serving the community.

“It’s not just about gun permit,” Jensen said. “It has been about an environment that was created where people fail. When you have a leader that promotes bad behavior … it creates a line that allows people to fail.”

Like candidates Christine Nagaye and Sean Allen, who previously spoke with The Paly Voice, Jensen hopes to combat the growing fentanyl crisis. According to Jensen, SCC law enforcement should address the sources of fentanyl, not just its presence in the county.

“We need to do a better job about working all together to do education on this level [beyond the county] as well as enforcement,” Jensen said. “Prevention’s got to be the cure … We have to have real dialogue.”

“If some people have to be here [in jail] until the mental health systems are in place, we need opportunities for rehab for treatment and for reentry,” Jensen said. “I don’t believe in building more jails. We cannot incarcerate our way out of a problem.”

Jensen said he was inspired to enter public service by challenges he faced throughout his life.

“My earliest memory is someone bringing me food in a little trailer outside the nation’s worst prison, the Golden State penitentiary in Louisiana, where my father was sentenced to five years for armed robbery,” Jensen said.

According to Jensen, these experiences ultimately shaped his desire to seek out justice, which remains at the core of his campaign.