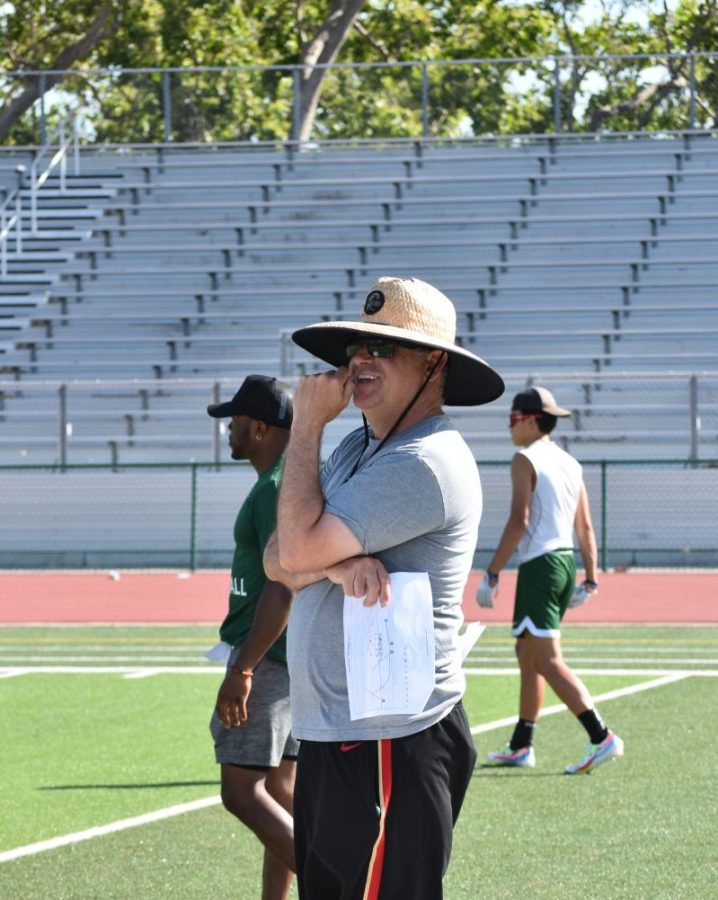 The sounds of a whistle kickstarting the game, the roar of the crowd echoing through the stadium, and the heart and commitment of players on the field — all familiar aspects of a football game at Palo Alto High School.

For newly appointed head coach David DeGeronimo, these are the sounds that he remembers as a staple at the Paly football program, one that he is now returning to after nearly 10 years following the resignation of former head coach and athletic director Nelson Gifford.

DeGeronimo brings over 23 years of experience to the program, including his 12 year career as a Paly assistant football coach, in which the Vikings won a state championship in 2010. He also was the Los Altos High School head football coach for the past three seasons, his team going 14-13 overall and 10-7 in league play.

DeGeronimo said his return to the Paly football program felt like the right choice.

“It’s really special,” DeGeronimo said. “I am grateful that they’re entrusting the program to me, and so super excited to get started and be back where I consider home.”

DeGeronimo said in a May 2 team meeting that his plans for the football program next year will center around revamping the old program while introducing new elements to the game.

“When a coach comes in, he’s got to run on what he knows and I do have a lot of [football] spread formations,” DeGeronimo said. “But I will let you guys know that there will be some elements starting from scratch and there’s going to also be some relearning [of plays].”

DeGeronimo said that having a variety of plays and strategies will be vital to creating a strong front next season.

“There’s going to be a time where it [play calls] just depend on who we’re playing,” DeGeronimo said. “And having, multiple formations, multiple plays, and multiple concepts, to me that’s what a balanced offense is, and I think we need to be balanced.”

With the resignation of all former coaching staff, DeGeronimo said both new players and new staff will need to work together to become accustomed to the new dynamic of the team.

“You [coaches] spend a lot of time with your players in meetings and on the practice field,” DeGeronimo said. “You spend a lot of time together, you get to know people pretty quickly. … I’m pretty sure I’m going to be on campus a significant part of next year, which I think is really important. I’m going to try and hire coaches that can also be on campus as well because that’s how you get to know kids.”

According to DeGeronimo, despite the apprehension around a brand new coaching staff, he will promote a supportive team environment.

“Love it now or love it later because it [football] is the ultimate team sport, there’s no doubt about that,” DeGeronimo said. “So whoever’s coaching us, I guarantee you, they will care about you. I guarantee that and your job is to care about each other.”

Junior football player Lincoln Tutor said despite some small transitions for the team, he has faith in Degeronimo’s coaching and leadership.

“I’m hopeful for the future,” Tutor said. “We did have to learn new offenses and defenses, however, I feel like we are going in the right direction to succeed.”

DeGeronimo initially left Paly due to his inability to become the football head coach.

“The coach at the time was like ‘If you want to be a head coach, you need to be a teacher,’” DeGeronimo said. “So that’s why I left Palo Alto, I went to get my [teaching] credential.”

DeGeronimo said he feels passionate about coaching this next era of Paly football because the game has lessons that carry over into the real world and impact players.