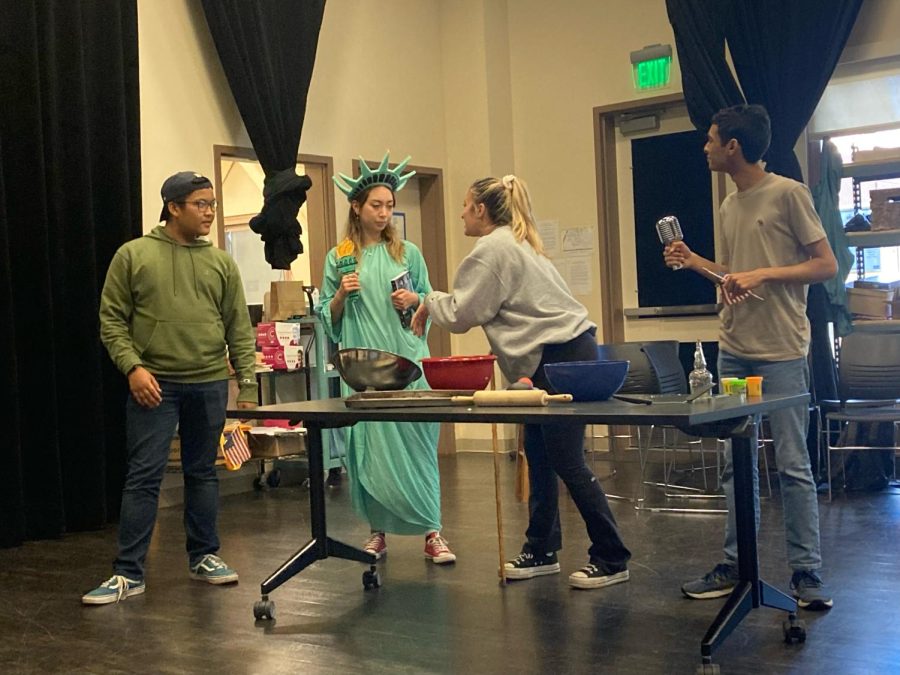 Starting tomorrow night at 7 p.m. in the Performing Arts Center, students can look forward to watching mystical butterfly wings, pandemonium in an alluring lake and the Statue of Liberty baking delectable freedom pies in the Palo Alto High School theater program’s One Acts.

One Acts consists of five individual student-directed performances, with each play being around 15 minutes. The collection of this year’s One Act productions includes “Anything Ghosts,” “Winged,” “Proof,” “Trout En Regalia,” and “The Awesome American Bake ON!”.

“Anything Ghosts” follows a story of modern-day supernatural podcasters who begin to encounter the paranormal beings they discuss. According to director and senior Anneke Salvadori, preparation for the play was initially challenging due to her lack of experience, but she eventually got a feel for her cast and co-director Jordan O’Reilly.

“With this being my first directing experience, it has definitely been a challenge to figure out how to give my actors constructive notes,” Salvadori said. “Luckily, my cast has been a dream to work with and have been able to take Jordan and I’s fumbles with a positive stride.”

Salvadori said transforming parts of the script was an additional barrier, which became a priority when practicing.

“This show was originally a radio play, so the initial circumstances were something we really had to think out,” Salvadori said. “A lot of the action is difficult to create on stage, so conveying magical powers in a realistic way has been our major focus in rehearsals.”

“Winged” tells the story of Flutter By, a girl who takes up the responsibility of saving her hometown from the devil after realizing she possesses magical powers. Co-director and sophomore Eloise Dumas said as a first-time director, her experience was not what she anticipated.

“One thing that surprised me was that a lot of my work didn’t come from directing the actors,” Dumas said. “They made great choices themselves without any prompting, so my work came from logistical things like coordinating what we wanted from tech.”

According to Dumas, she was glad to have a co-director, sophomore Sophie Vargha, to help refine the details of the show a little more.

“It’s super cool to have someone who can bounce ideas off of you and take on a little extra work if you’re overwhelmed, and Sophie is honestly the best person I could have imagined to direct a one act with.”

“Proof”, a snippet from David Auburn’s Tony-winning award piece, is about the problematic daughter of a distinguished mathematician, who begins to question how much genius, or madness, she inherited from her father.  Sophomore Jack Champlin, who plays Robert, said rehearsing for the play has been unique due to its different casting and performance methods.

“It’s a small cast, so I end up feeling pretty relaxed a lot of the time,” Champlin stated in a message to The Paly Voice. “Because of the nature of the show, it’s a lot more character-focused than other rehearsals I’ve been a part of.”

According to Champlin, the sober nature of the play has made it more difficult to embody the characters, but he hopes to give it his all in his performances to convey his character to the audience.

“The tone of this show is far more serious than anything else I’ve done in Paly theatre, so it’s been challenging to try and figure out how to realistically portray the emotions I want to get across,” Champlin stated in a text to The Paly Voice. “It’s a show that can very easily feel monotonous, so trying to think of ways to give life to these scenes while still having them feel intimate has been a fun challenge to face.”

Senior Naomi Wagner, who plays Claire, echoed a similar sentiment, saying the intricacy of the show has made it both demanding and intriguing.

“It is a pretty dark play that dives into many serious topics, but for me, sitting and really thinking about my character and discussing with my cast members about how our characters communicate has been very beneficial.”

“Trout En Regalia” depicts the adventure that a group of four friends encounters in a beckoning lake while traveling in the mysterious, unknown woods. According to director, writer and sophomore Kyle Vetter, One Acts are particularly special because it’s easier to work on each individual performance and bond with the cast.

“The smaller scale of each one act has made it a lot easier to connect with the small group and be able to do a lot of things that you only really see in a tight group,” Kyle said. “It feels a lot like a group with me just leading the efforts in staged ways, and I’m very proud of the result.”

Kyle said his inspiration for the act came from his passion to perform something unique, interesting, and most importantly, exciting for the actors.

“I knew I wanted to try and write some kind of strange comedy,” Kyle said. “Eventually, the focus shifted to a very weird and character focused adventure that I thought actors would have a lot of fun with.”

Kyle said even though he bumped into some minor challenges, it was still entertaining to overcome them.

“The occasional challenges were just trying to manage all of the aspects coming together at once, such as costumes, sets and polishing everything right as it ramps up to shows,” Kyle said. “But, it’s pretty fun in a way, and it’s exciting to see how everything turns out.”

‘The Awesome American Bake ON!’

Ending the One Acts lineup is “The Awesome American Bake ON!”, which depicts the finale of a popular baking show. Three bakers compete in various challenges to create pastries and treats to win the grand prize.

According to co-director and senior Renee Vetter, one of the biggest challenges they faced as a co-director was pacing the rehearsals due to the limited amount of time, which they said lead to everything being very fast-paced.

“We have a very limited time frame for rehearsals, so we have to be really productive during each rehearsal if we want to achieve the best product,” Vetter stated in a message to The Paly Voice. “We’ve been telling our cast to work on lines outside of rehearsal time, and they’ve been great at coming prepared so we can make the most of our time.”

Co-director and senior Ameer Ali said despite the restricted preparation time, the rehearsal process has been rewarding to see the final production.

“The rehearsal process for our one act has been very quick and fun,” Ali stated in a message to The Paly Voice. “It’s very exciting to see people bring your weird characters to life. I’m looking forward to seeing how they [the audience] react because it’s full of strange, funny surprises.”