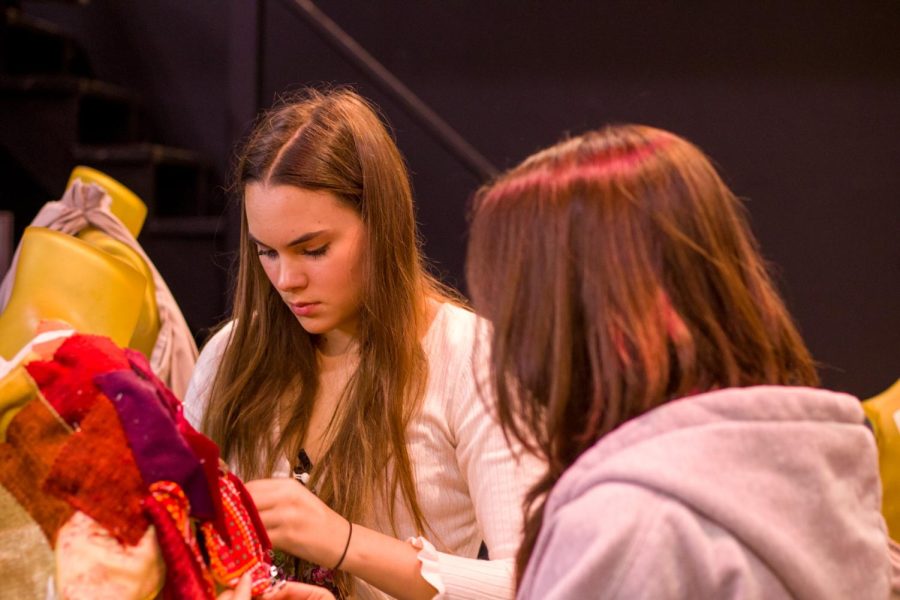 Sophomore Katya Oks pins fabric onto a mannequin in preparation for the Junk Couture Fashion Show. The event, hosted by Palo Alto High School's Social Justice Program, will feature outfits made out of entirely recycled materials in a show at 6:30 p.m. May 20 in the Performing Arts Center.

Amid the whir of the sewing machine and the smell of spray paint wafting in, students transform newspaper scraps into a shirt and drape trampoline netting into a dress as the Haymarket Theater explodes with energy and creativity.

With just over a week until Palo Alto High School’s “Junk Kouture” fashion show, sophomores in the Social Justice Pathway are hard at work perfecting outfits crafted from recycled materials.

According to history teacher Caitlin Drewes, who teaches the sophomore SJP cohort, the semester-long project accompanies the students’ Contemporary World History course. The assignment involves working with a group to research a country and craft an analogy representing the country’s history, then creating an outfit inspired by the metaphor.

“It’s a synthesis of all of the research they have been doing, and then expressing that in a creative way,” Drewes said. “It’s really about synthesizing all these ideas, like how do you show the birth of a nation in an artistic way? If you’re looking at religion or you’re looking at ethnicity, how do you pull that into a metaphor that works?”

Kiana Feldis, a sophomore in SJP, said she is looking forward to channeling her research into a meaningful, sustainable fashion show.

“I would say the purpose of the ‘Junk Kouture’ project is to give us a way to express and share what we have learned about the history of our group’s country in a creative way that also benefits our community,” Feldis said.

Not only are students making their own clothes, but the show is also zero waste, according to Feldis.

“All of the outfits we are creating will be made from 100% recycled materials, which minimizes waste,” Feldis said. “Also, [the show] hopefully inspires others to rethink what we do with our ‘trash.’”

According to Drewes, students will model their own outfits and briefly present information on their projects during the show at 6:30 p.m. May 20 in the Performing Arts Center. Sophomore Kali Ressi said the show will be an exciting culmination of all the hard work everyone has put in.

“My goal is just to push myself and try to make a dress that looks high fashion out of trash, but also displays the analogy that the dress is supposed to represent,” Ressi said.

According to sophomore Luciana Peralta, the project allows students to explore another country in-depth while also emphasizing collaboration, ultimately helping to build community within the program.

“I’ve made such great connections with everybody,” Peralta said. “I think it’s more about us learning how to be a good team and just applying real-world communication and relationships.”

Drewes echoed the importance of students gaining soft skills from the project in addition to an understanding of history.

“It’s really about group work and creativity and flexibility, like working with materials that don’t act in ways that they want them to act,” Drewes said. “Paly kids are really used to being able to do things perfectly, and this is anything but a perfect project, so part of it is just like, stick it up there and see what happens.”

Drewes, along with her colleague Marc Tolentino, ran the project in 2019 and plan to continue the tradition every three years with their sophomore cohorts. Drewes said she drew inspiration from the “Junk Kouture” television show in Ireland.

“I first learned about this project from my cousin who lives in Ireland,” Drewes said. “They do a huge national ‘Junk Kouture’ project and she was able to attend. I loved the idea right away and Mr. Tolentino and I decided to work it into our Social Justice Pathway curriculum.”

Sophomore Nadia Soberg said she is working with her group to create an outfit inspired by an analogy of Kenya to a phoenix.

“We’re creating a dress with a big flowy skirt,” Soberg said. “With that phoenix inspiration in mind, we’re thinking of using some really fiery colors on the skirt to really make it pop and hopefully communicate that metaphor to the audience.”

According to Soberg, the recycled component of the project gives a new life to materials that would otherwise be thrown away.

“For the skirt, we’re using coffee filters,” Soberg said. “We’re using old tubing to give it some structure and also to attach all the coffee filters to the waist, and then the top is made from old upholstery fabric and some wire, and then we’re thinking of making wings out of plastic bags.”

Feldis said the show represents the essence of the goals of SJP as a program.

“SJP is all about working together to build a stronger community and this project really captures that sentiment,” Feldis said.