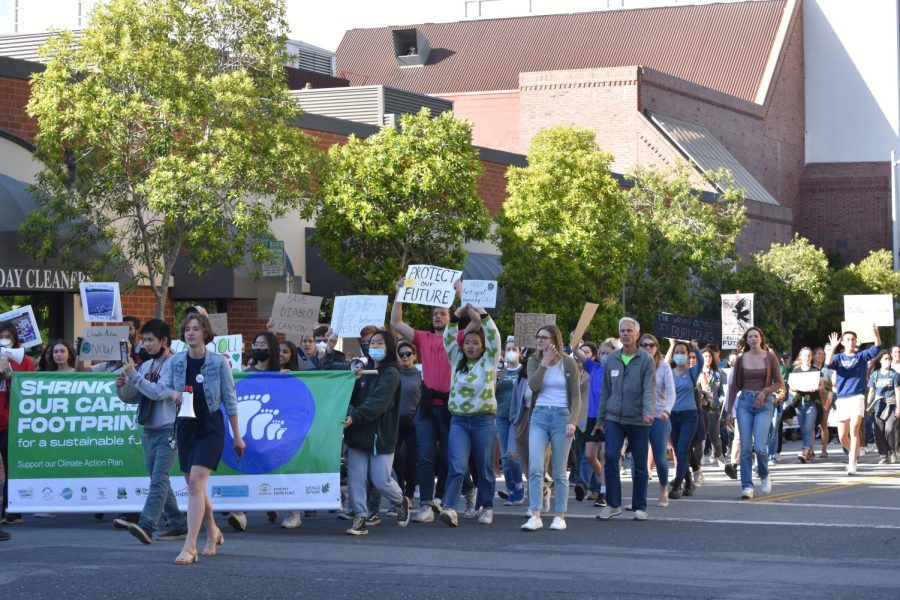 Students, elected officials and community leaders from across the Bay Area are energized to fight climate change after the “March and Rally for Our Earth” Friday afternoon in downtown Palo Alto.

“March and Rally for Our Earth,” a youth-led rally arranged by the Palo Alto chapter of 350 Silicon Valley, an organization working in San Mateo and Santa Clara counties, featured speeches from climate advocates including Congresswoman Anna Eshoo, State Assemblymember Marc Berman, Mayor Pat Burt of Palo Alto and performances from musicians and boisterous protest songs from The Raging Grannies.

A crowd of around a hundred students from local schools in Palo Alto marched, holding signs and banners to show their support. Through the streets of downtown Palo Alto, they chanted: “Hey hey, ho ho! Fossil fuels have got to go!” and “What do we want? Change! When do we want it? Now!”

According to congressional candidate Ajwang Rading, the community should be using ideas from this district to the poorest communities in the country.

“Climate change in Palo Alto is still a rich person problem, right?” Rading said. “It’s something that we can aesthetically and casually say we’re for because we can afford Teslas and solar panels here. Where we need to be talking about climate change — with the ideas from this district — is going to the poorest communities in the country … and make it easy for them to talk about these issues and finance the transition to electrification.”

Eshoo said one of her goals is to adopt policies that advance the shift to renewable energy sources.

In his speech, Berman said he wants youth to spread climate engagement on social media, with the goal of increasing community involvement across California and the country.

“This [climate activism] isn’t something that we can just do on a one-off,” Berman said. “This is stuff that we’ve got to be cognizant of and focus every day, year-round.”