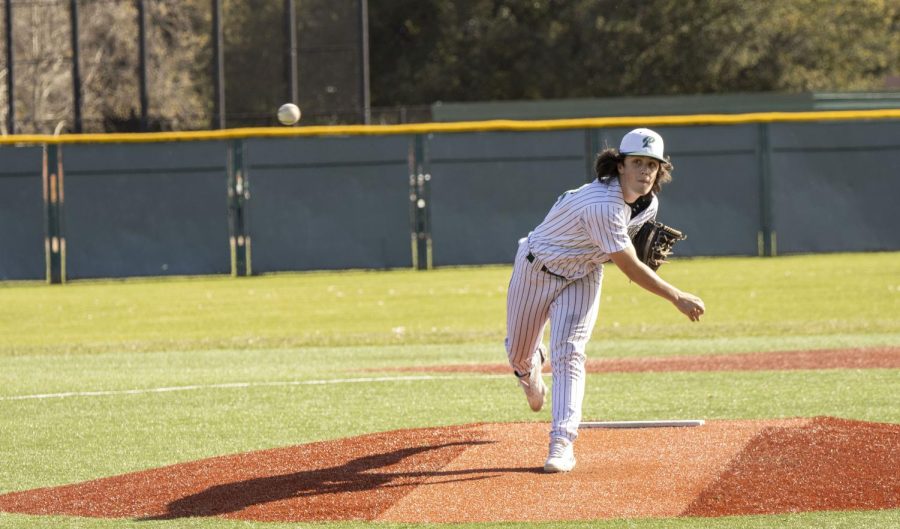 Junior pitcher Sam Papp warms up while the Mustangs prepare to step on the batter's box on Friday before the Vikings' 5-0 win Friday. Papp struck out four batters and limited the Mustangs to only a few base runs. "I think our pitching was amazing," Senior third baseman Danny Peters said. "Sam Papp did great job. He pitched the whole game perfectly." (Photo: Maxwell Zhang)

In a show of domination by the defense — and a pair of late-game home runs — the Palo Alto High School varsity baseball team (4-0) defeated the Homestead High School Mustangs (0-2) for the second time this season, with a score of 5-0, on Friday afternoon at home.

On Wednesday, in their first game against the Mustangs, which resulted in a 10-3 Viking victory, the Homestead pitcher hit the Vikings with pitches 12 times. However, the Vikings didn’t want to let that get to their heads coming into this second game, according to senior third baseman Danny Peters.

“We were upset about it [getting hit], but we didn’t want to have that be our mindset, ” Peters said. “We all agreed on just playing our game, playing calm, just playing who we are.”

Paly’s defense started out strong in the first inning. Junior pitcher Sam Papp threw an extremely consistent game, and the defense behind him got outs on a fly ball and a grounder to third base. Papp then struck out Homestead senior catcher Tyler Kong to end the half. Papp, who ended the game with four strikeouts, said he was proud of Paly’s defense.

“Every time I know I have a start, it’s always the same plan and always the same game no matter where I am.” Papp said. “I get up there, do my job, and I’ve got a great defense behind me here to pick me up.”

Paly’s offense didn’t initially fare well against Homestead. In the bottom of the first, senior center fielder Henry Bolte got on first and stole second, but was tagged out when he tried to steal third. Sophomore second baseman Charlie Bates also hit a single, but was quickly picked off by the senior Mustang pitcher Kailosh Menon.

“Our hitters needed to open up the gates a little better,” Peters said.

The second inning and top half of the third inning went by similarly, with Papp getting another strikeout. However, at the bottom of the third inning, Paly’s offense picked up. A single by sophomore right fielder Zachary Thom and a double by senior left fielder Zach Hayward set up two runners on second and third base. Then, a line drive down the center of the field by senior shortstop Xavier Esquer allowed both runners to score, putting the Vikings up, 2-0.

“Our bats were finally waking up a little bit, and I was loving it,” Papp said.

The offense of both teams went dormant again as the game continued without any runs, with both pitchers throwing a dominant game. At the bottom of the fifth inning, a promising situation arose for the Vikings. A single, hit-by-pitch, and a sacrifice bunt by senior designated hitter Andre Hyrkin, senior catcher Dominic De Feo, and Thom, respectively, set up runners on second and third. However, an athletic double-play by Menon ended the inning.

In the bottom of the sixth inning, the Vikings surprised the Mustangs with two home runs. On the second pitch, Bolte hit a home run over the left field fence. Following that, Peters hit another home run, allowing himself and Bates, who hit a single right before, to score, giving the Vikings a 5-0 lead.

“It felt so good,” Peters said. “I’ve been working on my swing so much, and being able to just show it off and do what I know I can do is amazing.”

The Vikings’ defense once again proved its worth in the seventh inning. A diving catch of a deep ball and a catch of a fly ball by Bolte were the first two outs. Finally, a strikeout by Papp ended the game, 5-0.

According to head coach Peter Fukuhara, mentality is just as important as physical skills when it comes matches or tournaments.

“Our team mentality has been fantastic all year,” Fukuhara said. “They have a lot of energy. They’re very motivated to play and they play together as a team.”

According to Fukuhara, he has high hopes for this season, since the team is composed of strong, physical guys with an extremely positive mentality.

“It’s still pretty early in the season, so we’re gonna get nothing but better,” Fukuhara said. “We’re still moving some guys around in different positions, so once we find our groove, we’ll get going pretty good.”

According to Peters, he has high hopes for the season, and believes that Paly will become one of the top teams in the state.

“If we can just compete and keep playing our game, we’re gonna be good,” Peters said. “We’re all excited for what’s to come.”

The Vikings won their non-league game Saturday with a score of 7-0 against Menlo-Atherton (0-0) and will play next on Wednesday against the Cupertino Pioneers (0-2) at 4 p.m. away from home.