Opinion: The end of the SAT 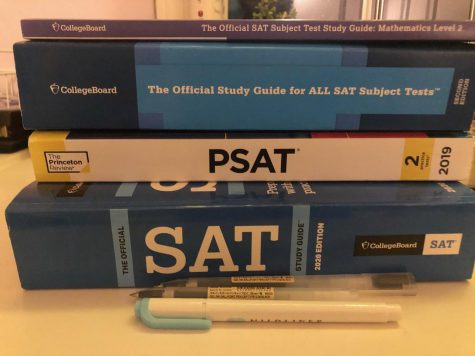 The sound of pencil scratches and the rustle of test booklets are common sounds for millions of students who take the SAT every year.

But that will change soon. Pencils will be replaced with keyboards and mice, and the paper replaced with the soft glow of a computer screen.

And that’s a bad thing.

According to a College Board update on Jan. 25, starting in 2024, the SAT will be completely digital, and two hours long — an hour shorter than it currently is — with more time for each question. Reading passages will be shorter, and a calculator will be allowed for the entire math section.

“The digital SAT will be easier to take, easier to give, and more relevant,” stated Priscilla Rodriguez, vice president of the college readiness assessments at the College Board, in the update.

Kent Hopkins, vice president for academic enterprise enrollment at Arizona State University, added that a digital SAT would bring a slew of benefits in the update.

But despite all the hopeful talk, the switch to an easier and digital SAT accomplishes little. It doesn’t increase accessibility — students still have to take the SAT in testing centers, according to NPR. And although it might seem like an easier test could lower performance gaps between groups of students, it only lowers the standard for everybody.

The new format will likely be the final blow for standardized testing’s role in college admissions.

The change comes with an increasing number of colleges becoming test-optional or test blind due to the exam’s discrimination against minority and low-income groups, according to the research group Brookings Institute.

According to the nonprofit FairTest, more than 1,800 colleges and universities are test-optional or test-blind when considering applicants, with schools like Harvard, MIT, and the University of California all adopting the new practice. Some colleges, like Harvard, are even pushing test-optional policies far into the future where the class of 2030 will have the chance to apply test-optional.

As it stands, the SAT is a tool for colleges to differentiate students into different categories of academic merit. If a majority of students are able to score highly, the SAT would become a useless metric in filtering potential applicants and colleges would have to fall onto other, more biased criteria when considering applicants.

Although the SAT does inevitably favor the wealthy because of accessibility to higher quality test prep, the current version of the test is better than the alternatives, according to the LA Times. Disadvantaged students have limited access to expensive extracurriculars or a multitude of AP classes, which are also considered in college admissions, while wealthier students have access to supplements like admissions consultants.

“[Changing the SAT] from pencil-and-paper delivery to an electronic format does not magically transform it into a more accurate, fairer or valid tool for assessing college readiness,” Schaeffer said.

When asked about how the digital SAT would fix inequality problems, UC Berkeley Chancellor Carol Christ echoed that it wouldn’t.

“I don’t see how the change to a digital format will change the fact that the results of the SAT are most closely correlated with family income,” Christ said.

What’s more, the change to an easier test-taking experience will likely lead to a shift of more students getting higher scores, according to Compass Education Group. If the College Board were to score the new, easier SAT on a more forgiving curve, it would simply lower the standard of the test for everybody without addressing the root problem of the exam’s inequality. Previously disadvantaged students might score higher, but the score will only be inflated by an easier test. With inflated scores across the board, the SAT would become less accurate in differentiating students and less useful to colleges.

When colleges start to turn away from the SAT, they take away a standard metric that every student has access to. According to the LA Times, they will have to favor grade point average, difficult classes, and flashy extracurriculars instead — all of which heavily favor the wealthy few of this nation.

An easier, digital SAT puts students and the College Board alike in a lose-lose situation. As the exam is already on the decline, the new, digital SAT format could mark the end of standardized testing.

The alternative is a new era of unbalanced college admissions, even more discriminatory than the last.