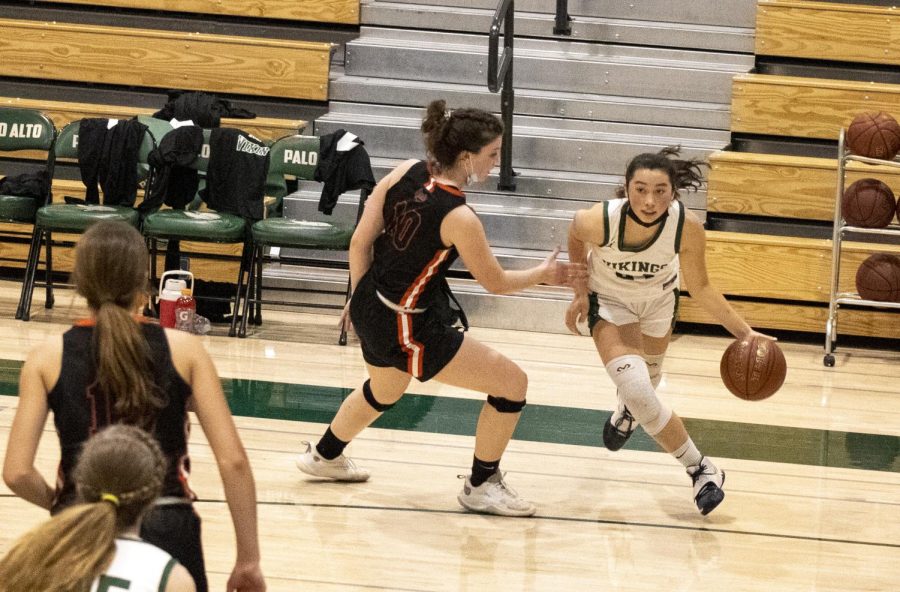 Freshman shooting guard Vienn Sheng dribbles past a Los Gatos defender during Palo Alto’s 55-31 loss Sunday at home. "We were hoping to get more shots and to really shut down their best players, which were 15 and 12,” Sheng said. “We wanted to identify what every players’ strengths and weaknesses were, and we also wanted more ball movement and good transitions.” (Photo: Arthur Wu)

In a devastating loss, the Palo Alto High School girls’ basketball (10-1) team saw their undefeated record come to the hands of the Los Gatos Wildcats (10-2), 55-31, Sunday afternoon at home.

The Vikings had an 18-game winning streak coming into this game with their roster, full of star players, hoping to end their season on a high note.

Despite the loss, the Vikings still remain first in the league and the team’s record will allow them to qualify for CCS. The Vikings took the lead early but multiple fouls from the Palo Alto defense cost them several points and ultimately led to the first quarter ending with Los Gatos leading, 11-8.

“We struggled to get into an offensive rhythm,” Vikings Head Coach Scott Peters said. “We tried to make some adjustments and run some different things, but it didn’t really work.”

Although the Vikings are known for their three-point shooting, they struggled to successfully score in the second quarter, with most of their shots were blocked by the Wildcats, ending the half with only nine more points. Los Gatos dominated offensively, and Paly found it difficult to hold down the Wildcats on the defensive end.

By the end of the second quarter, the game was still close, 21-17, in favor of the Wildcats. According to Peters, the Vikings were determined to pull through despite the problems they were facing on the court.

“We have been positive all year and we haven’t lost in two months,” Peters said.

Freshman shooting guard Vienn Sheng said they wanted to focus on their offensive strategy for the second half of the game.

“We needed to come down on offense because we were being very rushed and a lot of our players were having a hard time getting open,” Sheng said. “We were struggling to move the ball.”

The Vikings caught up to the Wildcats with several three-pointers from junior point guard Kaella Peters. However, the Vikings fouled five more times to give up nearly seven points. The score at the end of the third quarter was 34-22 in favor of the Wildcats. According to senior center Jessica Fiske, the Vikings’ confidence was lowered, and they struggled to maintain a positive attitude.

The Vikings were unable to hit outside shots in the 3rd quarter, and the Wildcat lead grew.

“Going into the fourth quarter, we wanted to keep our chins held high and not let our spirits drop,” Sheng said.

But Los Gatos quickly broke through Paly’s defense, with several layups and five more points from free-throw shots and despite the Vikings’ efforts, the game ended in a heartbreaking loss.

According to Coach Peters, the team hopes to take this experience with them as they advance to CCS.

“This [losing] is kind of a new feeling for us,” Peters said. “It’s something that we can learn from, and we’ve got to handle it better.”

The Vikings will face Los Altos (5-6) at 5:30 p.m. Tuesday at Los Altos in their final league game of the season.