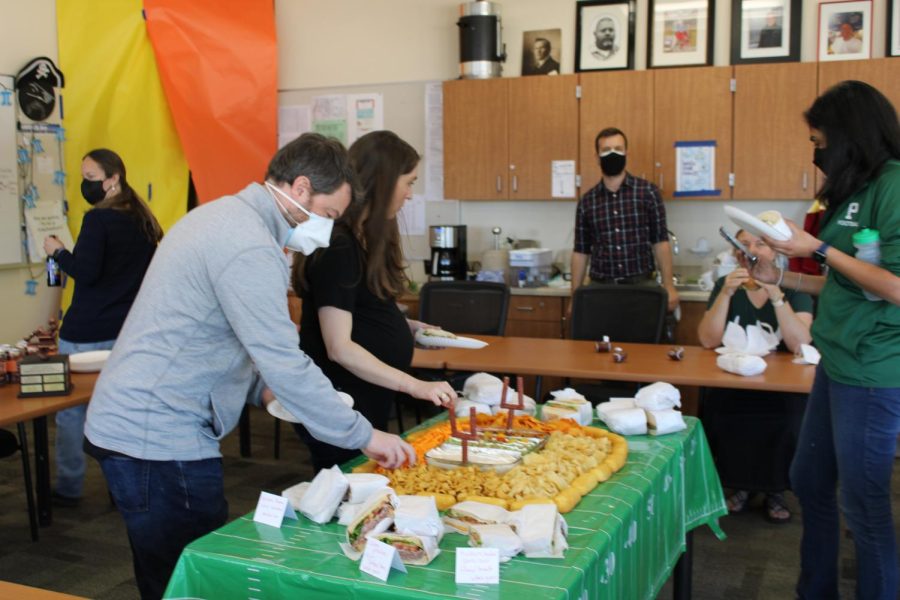 The annual competition between the two departments is aimed to create some friendly competition and highlight the Super Bowl – the National Football League’s annual championship game, which will be between the Los Angeles Rams and Cincinnati Bengals in Los Angeles this year.

According to math teacher Deanna Chute, the competition involves six math teachers and six science teachers who compete one-on-one with their fantasy football teams. This year, the Math Department is hosting.

“Anytime a math teacher plays a science teacher, we keep track of who wins,” Chute said. “[This year], science obliterated us – that’s why we’re throwing the party this year, because we’re the losers.”

This competition originally started as a fantasy football league where teachers from different departments would play each other, but over time it developed into a contest between only the math and science departments.

“It got a little bit more competitive between science and math,” Chute said. “We started egging each other on in a friendly way.”

According to Chute, the Math Department purchased a trophy four years ago, which turned the small lunch celebration into a competition where the two departments would exchange the trophies and then celebrate with a party involving a Snackadium – a stadium made out of snacks like carrots, chips, sandwiches, and guacamole.

“Everybody’s [teachers from the math and science departments] name is on it [the trophy],” Chute said. “It’s one of those trophies where the same trophy gets passed on [every year] and people’s names get added to it.”

In addition to teachers, some Paly students are looking forward to watching the highly anticipated Super Bowl.

Sophomore Matthew Arradaza said he is still excited to watch, despite being disappointed to see that the San Francisco 49ers were unable to make it to the Super Bowl.

“It really sucks that the 49ers weren’t able to make it, but I do think that this game will be extremely entertaining,” Arradaza said. “Both teams have a really solid roster of players that work with each other really well.”

Arradaza said that seeing the two teams make their way to the Super Bowl was exciting to watch.

“I’d love to see the underdog of this game win the title,” Arradaza said. “I am going to be rooting for the Bengals as it’s amazing that a team that was horrible in 2019 can make it the Super Bowl today.”

Sophomore Hannah Singer said she is not a football fan, but still watches the Super Bowl to get together with family and friends.

“I think it’s fun because people are competitive, but I really don’t think there’s any significance behind the actual game,” Singer said. “It’s more of a way for communities to get together and friends and family to hang out and eat food.”