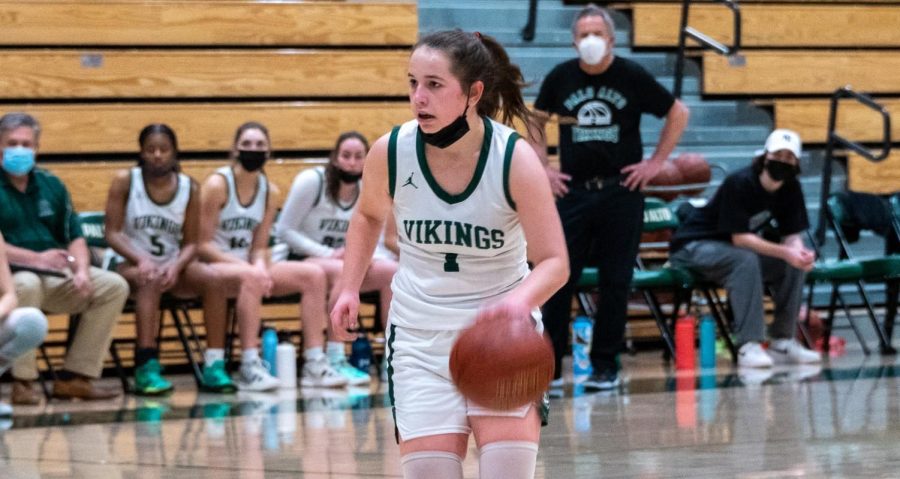 With the Central Coast Section finals approaching, the Palo Alto High School girls’ varsity basketball team (9-0) leads in the Santa Clara Valley league with a remarkable record going into its last games of the season.

The team is set to play Saratoga on Friday and their league rivals, Los Gatos, on Sunday. Head Coach Scott Peters said the team also played on Monday and Wednesday resulting from the rescheduling of games because they were earlier canceled due to the Omicron outbreak. Peters said having several games crammed into one week has proven to be a struggle for the team, especially with these last few games being worth more with the approach of CCS.

“It’s almost like the second half of our league in [the span of] a week and a half, which is a little bit unprecedented,” he said.

Although the team’s record wasn’t as amazing last year, the Vikings still finished first in the league with a 14-6 record. The team then qualified for the CCS open where the top eight teams in the central coast play in one major tournament. According to Scott Peters, this year’s team is still not at the same skill level as last year as they approach the most crucial games of the season.

“We [the team] are still just a work-in-progress in my mind,” he said. “We have a lot of youth that haven’t really been in the pressure cooker games.”

Scott Peters said the team’s excellent work ethic gives him confidence that the Vikings can achieve these few final wins to qualify for CCS, and possibly the CCS open invitation as well.

“I like a team that is not full of themselves and that wants to work and continue to work to get better and not judge ourselves on just our record,” he said. “I am most happy with how we [the team] are honestly always trying to get better.”

Although the Vikings are preparing to close out this season with a string of challenging games, junior point guard Kaella Peters says that the team isn’t changing much about how they practice as they get closer to CCS.

“To prepare for our upcoming games our team has been really focused on our energy and focus during practices and games and just executing our plays,” she said. “We are focusing on taking it one game at a time.”

She added that the team plans to go into these final three games of the season — Saratoga, Los Gatos, and Los Altos — with high hopes and optimism: “Everyone has worked so hard this season and put so much time in, we have played the best we can each game and, in my opinion, deserve the spot we are in.”

Throughout this season the Vikings have faced numerous obstacles, including the pandemic obstructing their practice and game schedule. However, according to junior shooting guard McKenna Rausch, they were able to overcome these hurdles to reach where they are today. Rausch also says that the team’s standard for itself continues to get higher with each win, and they have yet to grow complacent.

“The main challenge our team has faced is getting down on ourselves,” Rausch said. “If our shots aren’t falling, or the game feels off, we tend to be down on ourselves. But everyone always brings each other up and tells each other to just brush it off and keep playing.”

Going into the end of their season, the Vikings hope to continue their winning streak and keep their league ranking as they prepare for CCS.