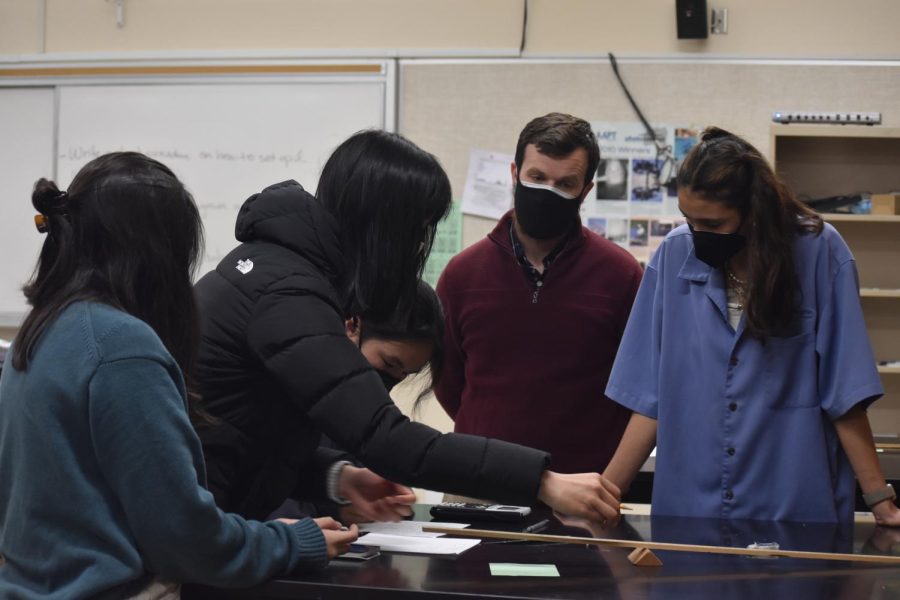 Sun, surf, and spray — the picture from a couple years ago captures physics teacher Thomas Peters enjoying the view of the the San Francisco Bay from his sailboat. With the wind in his hair and sun on his face, Peters, hired recently to teach at Palo Alto High School, finds the physics behind sailing fascinating. Peters’ all-encompassing interest in physics extends from the complex aerodynamics of a sailboat to simple classroom experiments.

Peters is a Bay Area native who grew up and has lived in Campbell his entire life. Prior to teaching at Paly, he completed a teacher preparation program at San Jose State University. Last year, Peters taught physics at Los Gatos High School as a part of the preparation program. Peters began teaching at the beginning of the semester after the retirement of former physics teacher Keith Geller.

In high school, Peters initially wanted to pursue a career as a band teacher after teaching music all throughout middle and high school. However, he ended up majoring in physics and engineering, a decision influenced by his interest in sailing.

“I walked out of the music building at my college and looked around and thought, well, now what?” Peters said. “At the time, the [2012 Cat Sailboat] races were going on, and I’ve always thought that sailing was neat because of the amount of physics and engineering involved.”

According to Peters, his passion for sailing led him to pursue a career in physics after previously undertaking a music-related pathway. The intricacies of the aerodynamics and physics behind the structure of the sailboat greatly interested him.

“It [the 2012 Cat Sailboat Races] was the first year they were using the boiling boat system which has a bit that sticks under the water and lifts most of the boat out of the water,” Peters said. “There’s way less drag and it turns into a great physics problem.”

Growing up, Peters was interested in a variety of subjects, but teaching was always a path he wanted to take. He has experience teaching a variety of different subjects.

“I have that one year of experience with high school physics, but I’ve been teaching other things for most of my life,” Peters said. “My first job in middle school was teaching sailing lessons and I’ve been teaching the marching part of marching band for about a dozen years now as well.”

According to Peters, there are aspects of the school he is unaccustomed to, but he feels welcomed by both his students and coworkers.

“The rest of the science department has been so wonderful and supportive with helping me figure things out,” Peters said. “My students have also been helpful and understanding of the transition as well.”

Peters said he hopes to help students understand and share his love for the subject.

“I never took physics as a high schooler. I really wish that I had,” Peters said. “I’ve always found science to be one of the most rewarding subjects to study, simply because it’s in every other aspect of our lives.”