Students prepare for the return of in-person finals 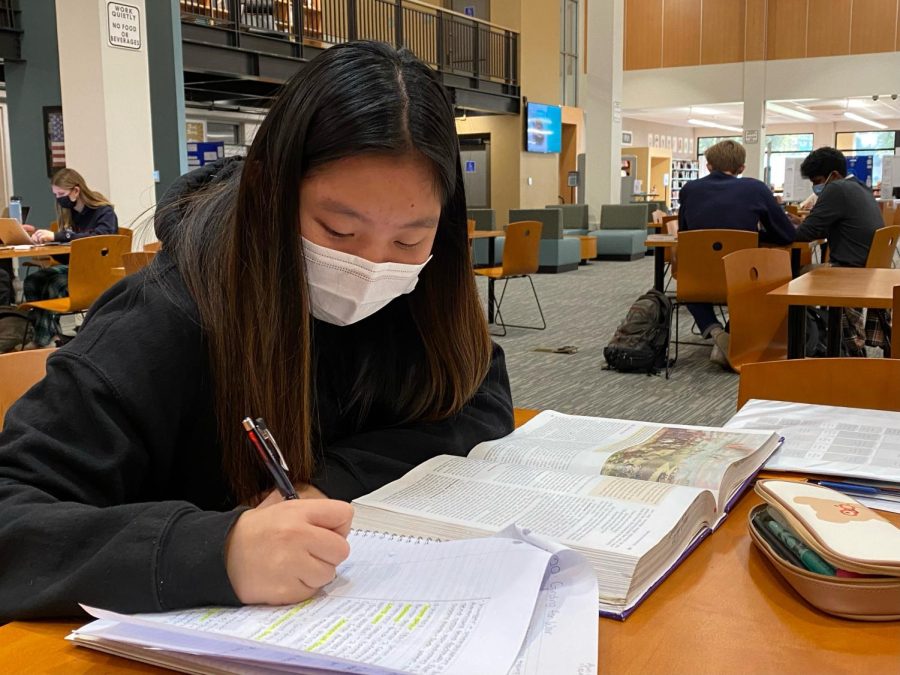 Junior Ajin Jeong prepares her notes in the library for her upcoming history final next week. This semester’s finals mark the first finals back at Palo Alto High School since the beginning of the pandemic, and many students are finding the last homestretch of the year to be difficult. Jeong says it helps her study when she can motivate herself through small rewards. “I like to give myself rewards like snacks from Trader Joe’s or spending time with my friends during study breaks,” Jeong said. (Photo: Leena Hussein)

As finals approach next week, Palo Alto High School students are feeling apprehensive about the return of in-person finals.

After a year of online school, underclassmen will be taking their first in-person high school finals.

“I feel a bit nervous about finals since I have no prior experience on taking them, so I’m not too sure what to expect, even with the explanations given by teachers,” freshman Tara Gokcek said.

Since finals over Zoom did not allow for much interaction with teachers, sophomore Austen Eng said the week before his first in-person finals at Paly have helped him develop new skills.

“This week has taught me how to speak up and actually go talk to my teachers,” Eng said. “Before I never really had to but now I have questions for finals.”

“Last year I felt like the teachers made it [finals] easier because they understood that online school is difficult,” junior Ajin Jeong said. “And there’s something different in taking a test in the real classroom. When I’m testing with other students, I can feel the nervous atmosphere.”

According to librarian Sima Thomas, the Paly library is allowing students to remain for an additional hour after school each day next week to study. A few designated teachers will be made available to students who need additional help, including Calculus and Statistics teacher Deanna Chute.

Students are also finding ways to take care of themselves during the time around finals. Eng said that he is managing stress with new strategies this year.

“I also have learned new study habits in preparing for finals which have been helpful, like making a lot of Quizlets, taking practice tests, and having study groups with friends,” Eng said.

Other students are practicing other self-care habits to keep spirits up this week. Gokcek said she is going to take care of her mental health with breaks while crunching for finals.

“To make sure I don’t overwhelm myself, I’m going to take breaks from time to time and also continue with sports and exercising because it helps clear my mind, especially while finals will be happening,” Gokcek said.