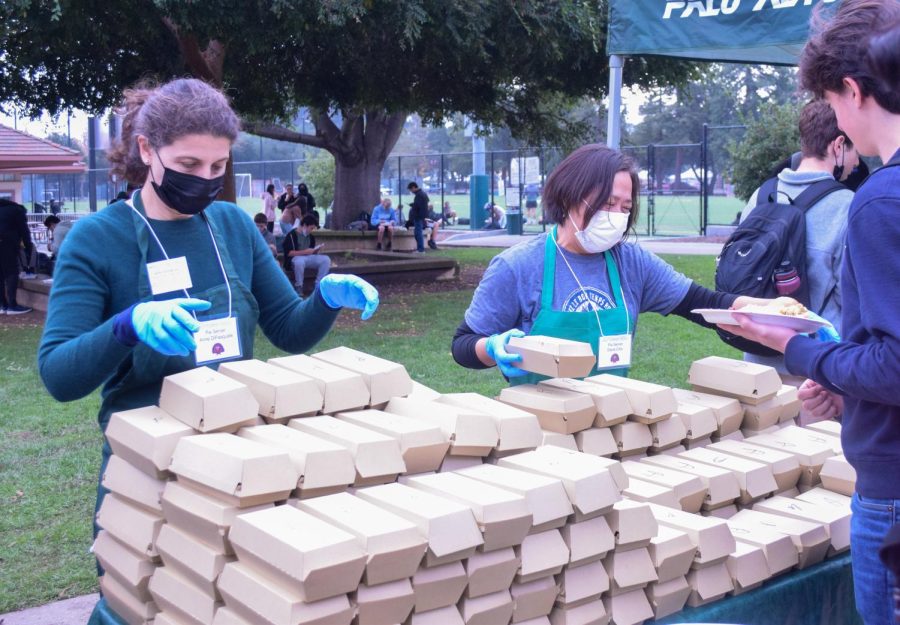 Students and staff alike show their Thanksgiving spirit with the return of Palo Alto High School’s annual Turkey Feast tradition during lunch on Friday on the Quad.

The Paly Parent Teacher Student Association has hosted the Turkey Feast — an event where students are invited to buy a meal composed of turkey, mashed potatoes, stuffing, and pie — since 2004. This year, the event also featured a performance by the Paly Pep Band. According to Paly PTSA president Charu Gupta, the feast had over 80 volunteers.

Gupta said this year’s feast incurred additional costs due to the impacts of COVID-19.

“This was an unusual year because food costs have gone up,” Gupta said. “The supply and demand issues meant that there’s a lot of stuff that just wasn’t available.”

According to Turkey Feast coordinator Kristen Anderson, a portion of the event’s proceeds will go to the Ecumenical Hunger Program, a non-profit that provides support services to local communities including East Palo Alto.

“It [the Turkey Feast] is doing something for our own community but also helping others in need,” Anderson said.

“I think it’s going really well. There’s a great turnout,” Kasanin said. “The band’s definitely helping out; it just seems like people are in a Thanksgiving-like spirit.”

Sophomore Roxanna Reid, a first-timer to the Turkey Feast, said she was surprised by the quality of the food.

“The turkey looks great,” Reid said. “I was expecting [something] like hot lunch food, but this is really good.”