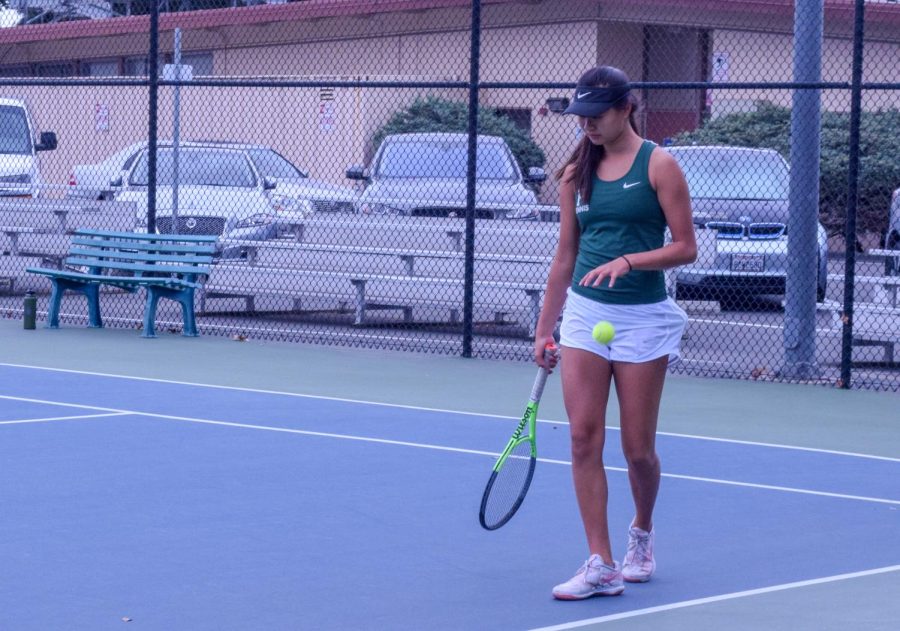 Senior Iris Li prepares to serve the ball last week at home during the first round of the Central Coast Section tournament. In the second round of CCS, the Vikings lost to St. Francis, 0-7. Li said she was happy with the team's performance during the season. "It was not necessarily the best way to end the season but I think we had a great overall season and it was really fun," Li said. (Photo: Jonathan Chen)

Coming off a first-round shutout victory against Los Gatos, the Palo Alto High School girls’ tennis team (6-7) was eliminated from the Central Coast Section tournament in the second round after losing, 0-7, to the Saint Francis Lancers (9-4) last week at home.

The Vikings’ loss in the second round of the tournament, Nov. 9, marks the end of their season.

According to freshman Erika Bussey, St. Francis was the favorite for the second round.

“It was kind of expected and I feel like we put up a good fight,” Bussey said. “We don’t really give up — we play strong throughout the whole match.”

Bussey said her loss against St. Francis was partially due to poor communication with her doubles partner.

“There are multiple times where we didn’t have the whole court covered, and we could have been a little better on that,” Bussey said.

Although the Vikings lost, all the matches were hard-fought, according to junior Malika Bowers.

“We’re really close in a lot of our matches, but I think we just need an extra force of will,” Bowers said.

Before the second round of the tournament, the Vikings won all their sets in the first round against the Los Gatos Wildcats on Monday.

According to head coach Andy Harader, the Vikings’ success in the first round was largely due to their consistency in returning the ball.

“Consistency can take you all the way, you know,” Harader said. “They don’t have to be great shots — you just have to get the ball back in the court.”

Beyond CCS, sophomore Erin Li and senior Iris Li will continue to play in the Santa Clara Valley Athletic League girls’ tennis tournament this Tuesday. Harader said he has high hopes for the doubles players.

“They know how to play doubles, they have good serves, they’re consistent — they’re just really good players,” Harader said. “I’m really excited about that [the tournament] too, because they’re doing really well.”