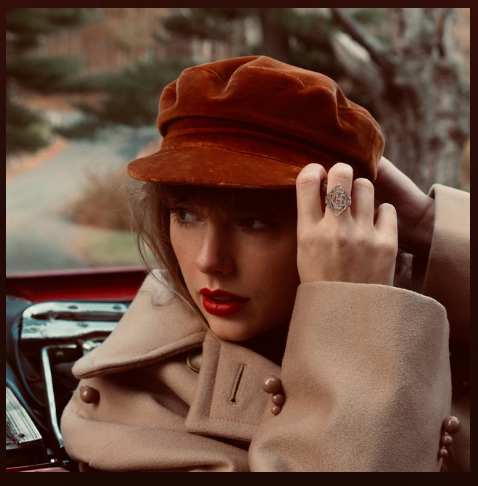 Taylor Swift has been one of the leading female artists on the music charts, and McCarter said it has a large part to do with her massive fanbase and support from followers. "It’s one thing to re-record your music in protest to not being able to own the rights, but to have the public react so well to that gives me hope that future female artists will be more respected," McCarter said.

Although this release has been anticipated by many, it is not Swift’s first re-recording of a back catalog album. In April, she released the re-recording of her 2008 album, “Fearless.” The songs on the album “Red TV (Taylor’s Version)” remained quite similar to their original counterparts on, yet an extra parenthetical title — “Taylor’s Version” — was tacked onto the back of each one.

Swift signed to Big Machine Records in 2005 with her original brand of a small-town 16-year-old country singer. Legally, Big Machine Records owns its artists and therefore their art. So many of Swift’s namesake songs like “Love Story,” and “I Knew You Were Trouble,” were altered to fit the persona that Big Machine Records wanted her to put out the world. According to Universal’s Republic Records, Swift signed with the label in 2018 once she was released from her contract with Big Machine.

Palo Alto High School junior Adelaide McCarter said Swift’s legal battle with Big Machine is yet another example of how women are discriminated against in the music business, and how Swift leads at the forefront of feminism in the industry.

“It’s really empowering to see Taylor be so successful in the music industry, which has been controlled by men for a really long time,” McCarter said. “Over the years she has inspired a lot of young girls, including myself, to try songwriting through the success of her music.”

Although Swift is now signed to Universal Republic, which allows her to govern her own artistic decisions, Big Machine Records still holds the rights to almost all of her discography, as stated by Swift in a recent interview with The Harvard Crimson. By re-recording her previous albums, Swift can directly receive the profits from her work rather than through Big Machine.

According to McCarter, this album release is not solely about a feminist progression within the industry, but also about how Swift can now share her art as she originally intended it to be heard by her fanbase. Along with the re-recordings, Swift released new songs she wrote along with the original album, that Big Machine prohibited her from releasing.

“As a musician, I can confirm that when you create music with restrictions in mind you are less likely to experiment and really be vulnerable with what you are writing,” McCarter said. “Which takes away from the music a lot.”

Junior Clair Qin shares a similar perspective, also being a Swift fan and a young female musician looking to enter the music industry.

“I’m happy to see her growth and efforts and hard work to own her past music, even if it means taking time off from putting out new music,” Qin said.

Qin said she continues to take inspiration from Swift’s musical talent and resilience against media scrutiny. According to Qin, Swift brings a powerful and pure perspective to music that is becoming rarer among artists.

“Unlike other artists, her songs are very honest and unfiltered,” Qin said. “Which is what makes them so memorable and relatable because the messages in her songs are so closely tied with humanity.”

According to Qin, Swift’s musical skill set definitely increases the attractiveness of her songs. However, it is mainly the message she sends with her music that works to continue to push the boundaries for women in the music industry, as well as women in general.

“Her work definitely continues to empower the female artist community in the music industry by showing that you can do whatever you put your mind to,” Qin said.  “The most impactful message she sends to young girls and women with her music is that anything is possible if you set your mind to it.”