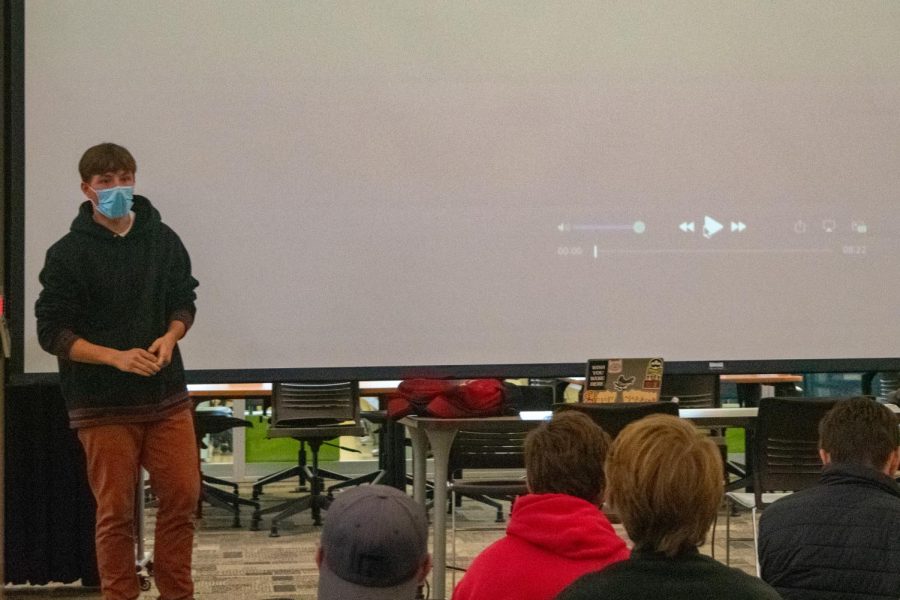 According to Film Club President Bennett Hardy, the event gave students an opportunity to showcase their films in a welcoming environment.

“People are gonna be more into it [the films] because they know these are my friends and they made this creation,” said Hardy, a junior. “You’re just more invested in people around you in your community than people outside your community.”

Hardy said that Halloween and the ‘spooky theme’ in October inspired him to organize the event.

“October is horror movie month, and I wanted to just replicate that by making a few [movies],” Hardy said.

Hardy directed “Whisper,” one of the films shown at the event, where the main character keeps hearing disorienting noises until he dies. Junior club member Marco Giovangrandi said “Whisper” was his favorite film at the event.

“My favorite part was that there was tons of emotion in the acting, and the audio — it really made you on the edge of your seat the whole film,” Giovangrandi said.

Junior Andrew Riggins played the lead character in “Whisper”. Despite a positive response to his acting, Riggins said he struggled with nailing down his character.

“My biggest challenge in acting was just doing a take over and over again, and finding the right way to do it,” Riggins said.

Other film club members had a different take on the event’s horror theme. Junior Samantha Lee acted in “Spirit Week Movie,” a comedy short where a killer dog led unspirited students to their demise.

According to Lee, comedy and horror can go well together.

“Comedy is really important because you can’t take everything in life seriously,” Lee said.

Lee said she struggled to stay composed while acting in “Spirit Week Movie” because the short was comedic.

“It was really hard to keep from not laughing,” Lee said. “And as you can see [from the film], we failed to do that.”