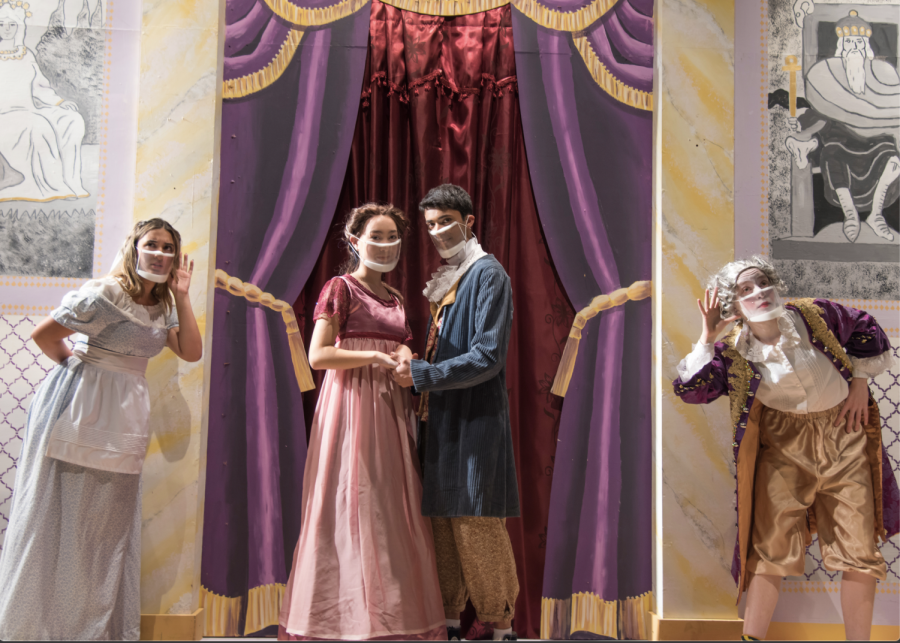 According to the program’s website, ‘The Illusion’ follows distinguished lawyer Pridamant of Avignon’s desperate search for her son. Throughout the journey, she encounters a magician who leads her through different pathways to find her son, some more difficult than others. Paly Theatre Director Sarah Thermond said the diversity of the action is the most attractive aspect of the play.

“It starts off hilarious and goofy, but quickly takes a dark turn,” Thermond said. “It’s got a little of everything, including a twist ending that will completely change the way you interpret everything you just saw. It’s a complex, somewhat odd show that doesn’t get done a lot, but I really do think there’s something for everyone.”

Senior Anneke Salvadori, who plays the Pridamant of Avignon, said she is most excited about the action she gets to perform in the play, including a sword-fighting scene in Act One.

“It’s [the sword-fighting scene] been choreographed by a professional stage combat coordinator and it looks so cool,” Salvadori said. “I’m constantly amazed by the actors in it.”

According to Salvadori, balancing her school workload and rehearsal for the play has been a difficult transition to make, especially with ‘The Illusion’ being only the second in-person production since virtual learning.

“The greatest challenge I faced was time management,” Salvadori said. “I’m in pretty much every scene to some extent, so juggling lots of rehearsals, my hair designs [and] homework has been a lot.”

With premiere night approaching, the cast and crew are looking forward to being able to feel the energy of the audience’s laughter and feedback, which was absent during Zoom productions. Junior Stage Manager Katel Fong said that, despite the indoor masks mandate creating the need to make costume alterations, she is most looking forward to seeing the character Matamore, played by senior Renee Vetter.

“Wearing masks does change some technical elements of acting — for example, facial expressions are harder to read, and it’s harder to hear actors, so they need to clearly enunciate to compensate,” Fong said. “But, I absolutely adore Matamore. Renee Vetter captures his personality so well, and I attribute much of my enjoyment of the character to their portrayal.”

Senior Lucia Chen, who plays Alcandre, said she similarly feels that masks significantly limit the actors’ ability to express emotions and cause them to adjust their acting for their audience.

“It’s a huge change from acting over Zoom because we have to focus on our body language instead of our face, since most it is covered,” Chen said.

Thermond said that one of the best parts about rehearsing in-person, however, is being able to use the open stage at Paly rather than a room at home.

“It’s been so great to be back in the theater space, especially since it’s my first time directing in the PAC,” Thermond said. “I also get to utilize all of our technological tools and teach skills like painting and light focusing.  I think the students in the cast and crew are really excited to be back, and that’s providing good motivation as we work.”

‘The Illusion’ will also be performed at 7:30 p.m. Saturday and 2 p.m. Sunday, found on the theater program’s website.