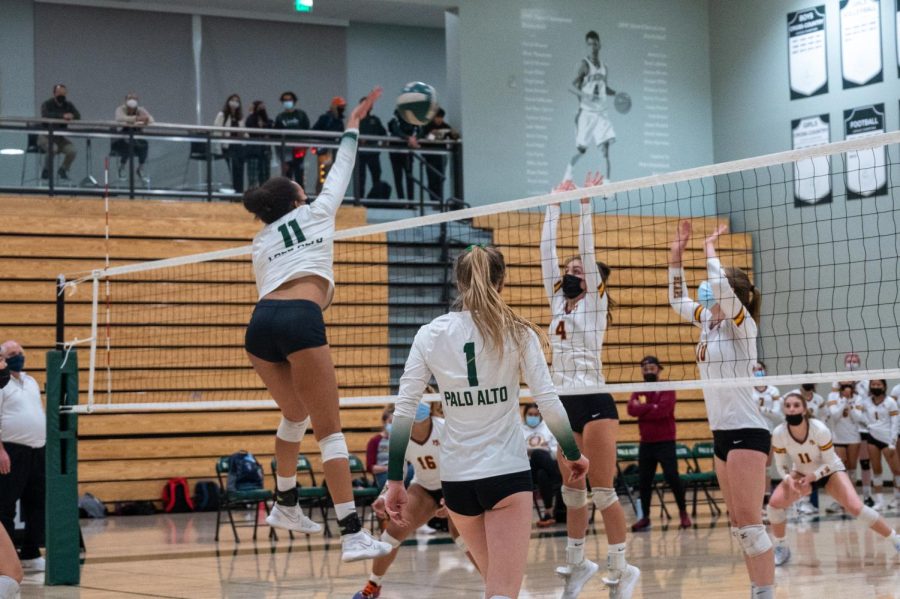 Viking senior middle blocker Olivia Harrison spikes the ball in the Bears’ defense at the Central Coast Section quarterfinals, 0-3 loss Tuesday at home. Harrison said the outcome of the game was unexpected. “It’s pretty disappointing,” Harrison said. “I think I’ve had a lot of fun just playing with this team. This one was really like a home game again.”

The Vikings’ loss in the competition means that they were eliminated from the overall tournament, marking the end of their season. According to junior libero Jess Watanabe, the loss was unanticipated since the Vikings defeated the Bears earlier in the season.

In the first set, the gap between the two teams slowly became apparent, with the Bears gaining several points off Viking errors, making the score 3-7.

However, a tap over the net over the net by senior outside hitter Thea Enache led to some momentum gain, with senior Olivia Harrison gaining the first block of the game and slimming the lead down to 6-7.Despite these minor victories, the team struggled for the rest of the set, never gaining a lead over the Bears.

On the other hand, Menlo-Atherton excelled on the offensive, with junior outside hitter Anna Ryan scoring kills that overwhelmed the Viking defense, eventually ending the set 23-25.

According to Enache, the countless errors within the set were a big factor in the team’s lack of dominance.

“There are lots of runs where you’re unable to keep the ball up and obviously as a hitter, that’s super frustrating because you get cold,” Enache said. “As a passer that’s frustrating, because you went on so many enormous runs off not a single playable ball. Maybe we’re doing something fundamentally wrong, but I don’t think any of us were prepared to lose this badly tonight.”

In the second set, despite several back-and-forth rallies, persistently controlled by Watanabe, the Vikings were unable to come out on top and fell with a score of 20-25.

According to Viking head coach Chris Crader, the Bears’ improvements from the last game were notable, which contributed to the Vikings being unable to keep up.

“Their usage of their middles as hitters improved a great deal,” Crader said. “They didn’t really set their middles much at all in that first match. [So] I thought their two middles had a huge impact in this match with their ability to hit and their ability to set. I thought that was a big improvement that we sort of received better in the first match than we did [in this match].”

In the final set, the Vikings suffered from many of the same issues, unable to consistently find their rhythm and ultimately being outplayed. Although some significant positive moments did arise, such as a kill by Harrison when the score was tied early in the set, the team fell short again, ending 20-25.

Senior server Hillary Cheung, who will be playing volleyball at the University of Chicago, said this season has been somewhat of a struggle for the team.

“I think also our energy was a little bit low, but it has kind of been a rocky season this year,” Cheung said. “We’ve had a lot of inconsistencies throughout the year.”

Along with Cheung, Enache, and Harrison, five other seniors will be leaving the team next year, leaving a significant gap in a portion of the roster. Despite this, many players from the lower grades like Watanabe and freshman server Sophie Mies leave hope for the future of the team.

Harrison, who plans on playing volleyball for George Washington University next year, said overall the loss was tough, but she also has hopes for the team to come out stronger.

“I try not to dwell on it too much,” Harrison said. “[I’m] just focusing on what I can do to move forward and get better as a player to help my team more.”